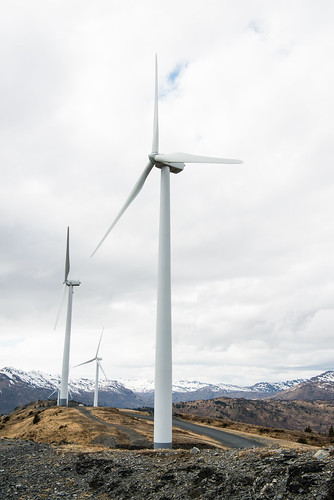 Kodiak, Alaska
(Image by U.S. Department of Energy)   Details   DMCA
"My goal is to cut government in half in twenty-five years, to get it down to the size where we can drown it in the bathtub."
- Grover Norquist

Republicans control every single elected statewide office in Texas' state government including the governor's mansion. Since 2003, the party has also controlled both the state's Senate and House. Both federal senators have been from the Republican party since 1993. Ignoring his party's long-term monopoly on power in the state, the Republican governor still tried to blame Democratic party policies for the crisis that enveloped their state during a winter storm:

"the Green New Deal would be a deadly deal for the United States of America."
- Governor Greg Abbott

Given that the Republicans have successfully blocked the passage of the Green New Deal in Congress, it is hard to see how this climate change fighting policy could have had anything to do with the disaster in Texas. That is unless Abbott and his fellow Republicans secretly passed a Lone Star State version of the law in the dead of the night when no one was looking. This would have gone against the GOP brand in which denying science is a central tenet. Perhaps instead of trying to kill off the Green Deal they should have looked at the death and suffering around them and realized that the latest in a string of extreme weather events proves that change in human behavior is necessary.

With electricity blackouts across Texas, many are wondering: what happened? How does the energy capital of the United States run out of power? Here's what happened. THREAD
Rep. Dan Crenshaw (@RepDanCrenshaw) February 16, 2021

It is true that 16 gigawatts of renewable energy, mostly wind power, had gone offline during the storm. This can be directly attributed to the fact that Texas did not have regulations in place requiring utility companies to winterize wind turbines. With the proper technology wind turbines can operate successfully in conditions much colder than what was experienced in Texas. In fact, Australia has been using wind to help power its research station in Antarctica since 2003. Representative Dan Crenshaw and his free-market cohorts are correct in asserting that "reliability is what really counts in a crisis" but it is doubtful that they will probe too deeply into why Texas failed at insisting that their energy producers be prepared for a weather event that was not unexpected.

Texas has more wind capacity than any other state and on May 2, 2020, at 3:00 AM wind generation broke a record by contributing 59% of hourly electricity demand in the state. However, due to seasonal variations in wind patterns, the Electric Reliability Council of Texas (ERCOT) had predicted in advance that "wind energy would make up less than 10% of the overall...capacity" this winter. Is it possible that a dip in energy production from a source that was only supposed to cover a small percentage of load really brings down the entire system? Of course not.

In reality, the power lost from renewable energy "made up only about a third of the lost power on the state's grid. Nearly double that capacity had been lost from thermal energy sources like gas and coal." The same lack of regulation that plagued wind turbines also allowed the natural gas infrastructure to be built without adequate protections for extreme cold. "Natural gas, coal, and nuclear plants which provide the bulk of Texas' power in the winter were knocked offline". Yet, as his fellow citizens froze to death, Governor Abbott, focused on renewable energy in an effort to promote his political agenda.

Further disproving Republican talking points, solar was the most reliable source of power during the crisis as it "basically never went offline" and "performed pretty much exactly as expected." Wind power also bounced back more quickly than non-renewable sources of energy "and wind operators are benefitting from massive cash windfalls due to their ability to produce electricity while electricity prices are literally as high as they can rise". While AOC was in their state raising millions in aid, perhaps Texas' leaders (at least the ones who had not fled to Cancun) should have spoken to her about how a Green New Deal would benefit their citizens.

The crisis in Texas was made even worse by the state's insistence on taking the "united" out of the "United States of America." While all of the other contiguous states are connected to shared power grids, The Lone Star State decided to go it alone. This allows them to avoid federal regulation, but it also means that they cannot obtain energy from out of state when in-state providers cannot adequately meet demand. The winter storm's impact on the cities of El Paso and Beaumont, which are connected to the Southwest Power Pool instead of ERCOT, "was relatively minimal".

Will the costs of this crisis be enough for the people of Texas to see that although deregulation can bring short-term savings, the costs over time can be sky-high?

At the height of the crisis, four million customers lost power and ten million people did not have safe drinking water. "At least 22 people have died in connection with the winter weather." Those with billing programs that are market-based are facing bills that are topping out over $10,000. Abbott says that "Texans who have suffered through days of freezing cold without power should not be subjected to skyrocketing energy bills due to a spike in the energy market", but taking away these company's profits would seem to be the type of Socialistic program which helps those in need that the GOP keeps warning us about. If the governor really believes that the market should be allowed to operate freely, then he should be urging his constituents to be content with the fact that utility companies are "offering flexible bill payment options to support customers impacted by the storm."
________________________________

Related Topic(s): Deregulation-Regulation, Add Tags
Add to My Group(s)
Go To Commenting
The views expressed herein are the sole responsibility of the author and do not necessarily reflect those of this website or its editors.