The last words: "This man is insane!"

A Methodist Minister, a Muslim Imam and a Fred Phelps Impersonator walk into a bar... 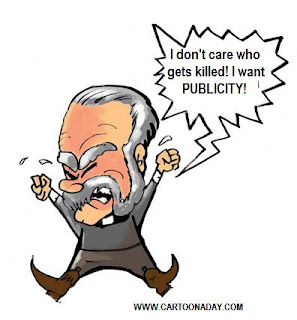 OK, I'm straining to be light about the whole thing, but the video of Terry Jones going toe-to-toe with Imam Hassan Al-Qazwini and Rev. Ed Rowe - Pastor of Central United Methodist Church in Detroit would be hysterically funny if peace and safety didn't hinge on it. All the talking points are there, but Jones' insistence that his actions are not harmful and that they have a point hold no correlation to those points.

SPECIAL NOTE: You may well be reading this after Jones' attempt to protest, but to get a good look at simple reasoning being thrown at someone like Jones, you really must watch the video. The idiom "Pearls Before Swine" will surely pop into your head. If you have any problems viewing it, go HERE to the site. And, yes, it's that important.

Comic Update: As if in some old sitcom (discontinued after 4 episodes), this happened to Jones after the interview:

Controversial Pastor Terry Jones made a name for himself after burning a Koran to protest radical Islam.  On Thursday, Jones fired bullet into the floorboard of his car.

Southfield Police say the gun accidentally discharged.  No one was hurt.  No Charges were filed.  Police gave the gun back to Jones and sent him on his way.

Jones was born 90 years too late: he could have been a star in Mack Sennett's Keystone Cops comedies.

Where was I? Ah, yes, the talking points: Jones swatted them off like flies, not knowing that he looked totally cold and callous throughout the entire discussion. He was introduced as "the most controversial man in America - maybe the most controversial man in the world!" and that may have set his ego flying. He definitely studied under Fred Phelps.

He spoke in even tones from a scowl-covered face how he had been "around the world" and spent 30 years as a "missionary " in Europe, omitting the fact that his last "sect" in Europe (Germany) had ousted him with the help of the German government. Evidently the 800-member church could not stand his dictatorial ways. When asked pointedly "What are you trying to prove?" he said it was to "raise awareness" about growing "radical" Islam, Jihad and Sharia law.

He also compared himself to Rev. Martin Luther King.

In reference to his burning the Quran: "The Quran is a book, I do not care how holy it is. It is not flesh and blood." Others chimed in that Jones had "blood on his hands" in knowing that burning the sacred scripture of Islam would cause violence.

"Absolutely not." He reasoned that what people did 7,000 miles away was not related to the burning because radical Muslims always react violently. (I almost interjected at this point: "Get yourself out of the 14th century: today, one word - in any part of the world - can set off a holocaust against any group." The image of me screaming at the computer screen, however, made me look almost as ridiculous as Jones.)

Both the Imam and Rev. Rowe were, in effect, stonewalled by stupidity. Imam  Hassan Al-Qazwini's reasoning, while not flawless, was direct and to-the-point: Jones did not know anything about the Quran, Islam or even Christianity. He calmly pointed out that the Quran honors and mentions Jesus Christ numerous times and that Jones dishonored Jesus as well as Mohammad. Pastor Rowe, however, was extremely agitated: " I don't own your vision of Christianity at all." And later: "He's lying about Christianity, he's lying about Martin Luther King and he's lying about Islam."

Rev. Dan Vojir is has been writing/blogging on religion and politics for the better part of ten years. A former radio talk show host (Strictly Books " Talk America Radio Network) and book publisher, Dan has connected with some of the most (more...)
Related Topic(s): Arrogance; Christianity; Dearborn; Detroit; FOX NEWS; Fearmonger; Hatred; Jesus; Michigan; Righteous Arrogance; (more...) STUPIDITY; Terry Jones, Add Tags  (less...)
Add to My Group(s)
Go To Commenting
The views expressed herein are the sole responsibility of the author and do not necessarily reflect those of this website or its editors.