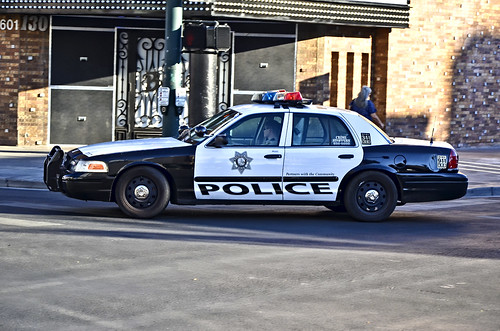 Metropolitan Police
(Image by TDelCoro)   Details   DMCA
href="https://www.ebony.com/news/community-outraged-after-police-shoot-3-children-in-the-head/">Am I going to get shot again.'"2-year-old survivor of a police shooting that left his three siblings, ages 1, 4 and 5, with a bullet in the brain, a fractured skull and gun wounds to the face

Children learn what they live.

And if children live with terror, trauma and violenceforced to watch helplessly as their loved ones are executed by police officers who shoot first and ask questions laterwill they in turn learn to terrorize, traumatize and inflict violence on the world around them?

I'm not willing to risk it. Are you?

It's difficult enough raising a child in a world ravaged by war, disease, poverty and hate, but when you add the toxic stress of the police state into the mix, it becomes near impossible to protect children from the growing unease that some of the monsters of our age come dressed in government uniforms.

Case in point: in Hugo, Oklahoma, plain clothes police officers opened fire on a pickup truck parked in front of a food bank, heedless of the damage such a hail of bullets26 shots were firedcould have on those in the vicinity. Three of the four children inside the parked vehicle were shot: a 4-year-old girl was shot in the head and ended up with a bullet in the brain; a 5-year-old boy received a skull fracture; and a 1-year-old girl had deep cuts on her face from gunfire or shattered window glass. Only the 2-year-old was spared any physical harm, although the terror will likely linger for a long time. "They are terrified to go anywhere or hear anything," the family attorney said. "The two-year-old keeps asking about 'Am I going to get shot again.'"

The reason for the use of such excessive force?

Police were searching for a suspect in a weeks-old robbery of a pizza parlor that netted $400.

This may be the worst use of excessive force on innocent children to date. Unfortunately, it is one of many in a steady stream of cases that speak to the need for police to de-escalate their tactics and stop resorting to excessive force when less lethal means are available to them.

For instance, in Cleveland, police shot and killed 12-year-old Tamir Rice who was seen playing on a playground with a pellet gun. Surveillance footage shows police shooting the boy two seconds after getting out of a moving patrol car.

In Detroit, 7-year-old Aiyana Jones was killed after a Detroit SWAT team launched a flash-bang grenade into her family's apartment, broke through the door and opened fire, hitting the little girl who was asleep on the living room couch. The cops were in the wrong apartment.

In Georgia, Christopher Roupe, 17, was shot and killed after opening the door to a police officer. The officer, mistaking the remote control in Roupe's hand for a gun, shot him in the chest.

These children are more than grim statistics on a police blotter. They are the heartbreaking casualties of the government's endless, deadly wars on terror, on drugs, and on the American people themselves.

Then you have the growing number of incidents involving children who are forced to watch helplessly as trigger-happy police open fire on loved ones and community members alike.

Related Topic(s): Police; Police Brutality; Police Killing Children, Add Tags
Add to My Group(s)
Go To Commenting
The views expressed herein are the sole responsibility of the author and do not necessarily reflect those of this website or its editors.