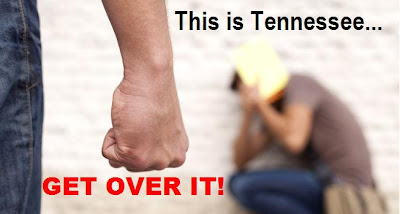 Over four year ago, the state of Tennessee made a proclamation raising "prophet" Lou Engle to genuine religious icon status:

On April 9th, 2007 the One Hundred Fifth General Assembly of the State of Tennessee and the House of Representatives passed a resolution recognizing and blessing TheCall and Lou Engle, passed by the Tennessee state legislature.

A resolution is a deeper legislative act than a "proclamation". A resolution carries more weight of authority, and goes through a more complicated legal process before passing.

And now, Tennessee - the state that never got over the Scopes trial* - is emulating Engle's work in Africa by pushing a bill that would definitely make it OK to bully gays in schools - for religious purposes, of course.

Harassment, intimidation, or bullying prevention task forces, programs, and other initiatives formed by school districts, including any curriculum adopted for such purposes, shall not include materials or training that explicitly or implicitly promote a political agenda, make the characteristics of the victim the focus rather than the conduct of the person engaged in harassment, intimidation, or bullying, or teach or suggest that certain beliefs or viewpoints are discriminatory when an act or practice based on such belief or viewpoint is not a discriminatory practice as defined in 4-21-102(4).

Last July, Gov. Bill Haslam signed into law a measure that prohibits local districts from passing and enforcing any anti-discrimination laws stricter than the ones set down by the state of Tennessee (hint: the state doesn't have any real anti-discrimination laws). The state legislature also created a firestorm in prohibiting educators from discussing homosexuality in schools with the infamous "Don't Say Gay" bill (see video below with Star Trek's George Takei).

Tennessee has been known for years to house anti-gay hate-mongers ala Fred Phelps, people like Glynis Bethel who pepper-sprayed a woman who protested her anti-gay preaching, then pepper-sprayed the police who took her into custody. And the country made note of the gay bashing attack instigated by one young man's own preacher father. But the latest attempt by the Tennessee legislature to allow anti-gay bullying is considered a step back in time and culture. Or in a lock-step with the likes of Uganda.

Too Close To Home

But while leaders of the anti-gay movement in Uganda were spurred on by the likes of Lou Engle and The Call (his ministry), the efforts of Engle and his followers in the U.S. have garnered attention mainly for their anti-Muslim attacks, side-lining their influence in local governments like the counties of Tennessee on issues of anti-gay discrimination.

So just who is supporting the bill?

The leading proponent of the bill is the Family Action Council of Tennessee, a social conservative group linked to Focus On The Family and to the virulently anti-gay Family Research Council. And the leader of FACT is former Republican state senator, David Fowler who now admits that he has helped create a firestorm, but seems to be rather proud of it: In an interview, Fowler said, "the purpose is to stop bullying, not create special classes of people who are more important than others."


In the past, the denial of Fowler and FACT concerning anti-gay bullying in the suicide of teen Jacob Rogers demonstrated how uncompromising in its attitude towards teen sexual identity many people in Tennessee are:

The Nashville Scene reported that, according to FACT, Rogers' suicide was a result of "the rotten fruit of the all-about-me individualist culture that comes when we deny the existence of God and his image in us."

But for some people, the way to stop bullying is to yank the kids of FACT's families out of school: "You're going to hell" is a common bullying tactic too often heard by gay teens across the country and it is this particular tactic that FACT wants to preserve.

Because Tennessee has over 35 designated hate groups in the state, it ranks as one of the most serious outposts of hate in the country per capita.**

FACT will definitely make the total 36.

*Rhea county, where the Scopes Trial was held, celebrates Scopes' conviction annually. It is also the county that tried to get the state to pass a resolution allowing it to criminalize homosexuality.

**According to the Southern Poverty Law Center. There are 9 KKK affiliates in the state.

Rev. Dan Vojir is has been writing/blogging on religion and politics for the better part of ten years. A former radio talk show host (Strictly Books " Talk America Radio Network) and book publisher, Dan has connected with some of the most (more...)
Related Topic(s): Anti-gay; Bullying; Family Action Council Of Tennessee; Kill Gays Bill; Lou Engle; Scopes Trial; Tennessee, Add Tags
Add to My Group(s)
Go To Commenting
The views expressed herein are the sole responsibility of the author and do not necessarily reflect those of this website or its editors.