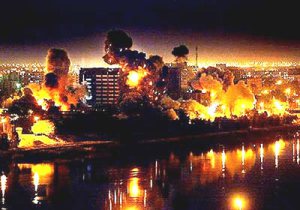 Well, here we are, Truthseekers. Another terrible anniversary of the Bush Crime Family's blasting away at Baghdad. An illegal invasion based on phony evidence that attempted to tie Saddam Hussein to al Qaeda and bin Laden (who hated Saddam almost as much as the US) in an opportunistic effort to destroy Iraq in a way Bush the First was unable to accomplish.

Ten years after this night of "shock and awful," Bush, Cheney, Rove, Rummy, Condi, Ari, Colin and the rest walk free with immunity, despite the tens of thousands they left maimed and murdered in their wake. Much of Iraq is in ruins -- as is the US economy and our global image, and we are still mired in an un-winnable war while the body count continues to rise.

As the Guardian reports today:

"Hisham Shouar was two hundred metres from his shop when the car bomb detonated, killing six people and injuring three others a short distance from the fortified Green Zone.

"The blast tore through his shop, where he sells toys and groceries, as well as a currency exchange and a pharmacy, setting fire to the cars parked around it.

"The bomb was one of twelve devices to detonate in Baghdad in a deadly wave of explosions by Sunni extremists aimed at Shia areas that left 56 dead and 200 injured. The attacks took place ten years to the day after President George W Bush announced the start of the US-led invasion of Iraq to depose Saddam Hussein."

"In the immediate aftermath Shouar and a friend were tidying up the damage. 'To tell the truth we're beyond being scared,' he said. 'You get used to it. You become numb to the explosions.'

"Within a few minutes, he added, his telephone was ringing with friends telling him about other explosions and other deaths."

Can you imagine for a moment what a different kind of world we'd have if Dubya hadn't successfully stolen the 2000 election form Al Gore?

Kathy never expected a career in radio as a talk show producer. Born and raised in Atlanta, Georgia, Kathy was completing her nursing degree when in 2001 - in an emergency - she was asked to fill in as the producer of Mike's program. Within a few (more...)
Related Topic(s): Bush; Invasion; Iraq War; Shock And Awe, Add Tags
Add to My Group(s)
Go To Commenting
The views expressed herein are the sole responsibility of the author and do not necessarily reflect those of this website or its editors.