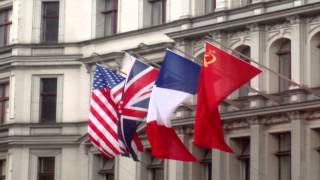 The criminally insane governments of the US, UK, and France are sending a flotilla of missile ships, submarines, and an aircraft carrier to attack Syria in the face of Russian warnings. What is the likely outcome of this outrageous act of aggression based entirely on an orchestrated and transparent lie, an act of reckless aggression that is more irresponsible and more dangerous than anything done by the demonized Nazi regime in Germany?

There are no protests from European governments. There are no protesters in the streets of European and US cities. Congress has not reminded Trump that he has been given no authority by Congress to launch a military attack on a sovereign country that is likely to ignite a war, possibly World War 3. Everyone seems content with the prospect of the end of the world. The moronic American presstitutes are egging it on.

(1) The Russians, trapped in the deluded belief that facts and evidence matter to the West and that common sense will prevail, accept the attacks. This outcome is the most dangerous of all, because this outcome will encourage more attacks until Russia is backed into a corner and has no alternative to a direct nuclear attack on the US.

(2) Russia takes the initiative in the brewing conflict and escorts the US missile ship, USS Donald Cook, out of attack range of Syria before the attack flotilla arrives and declares a perimeter line beyond which the Western flotilla becomes target for attack. This should force a showdown between Trump's warmonger government and the US Congress that would challenge Trump's ability to unilaterally commit the US to war.

(3) Russia escorts the Donald Cook away from the scene and simultaneously wipes out the military capabilities of Saudi Arabia and Israel, removing Washington's ground-based allies in its attack on Syria, thus loading the odds in Russia's favor, and making it clear that Russia is going to pre-empt an attack, not respond to one.

(4) Russia, in the deluded belief that it must prove itself in the right, accepts the attack and its unpredictable damage before responding. This outcome is almost as bad as the first, as this lets the war start in contrast to options (2) and (3) which have some possibility of preventing a US/Russian confrontation by forcing common sense on the Americans.

(5) Senior German politicians inform Merkel that Britain and France's support of the US strike on Syria could commit NATO to a war with Russia. Germany has had one devastating experience with the Russian military and does not need another. They could pressure Merkel to withdraw Germany from NATO. The resulting consternation/confusion would likely halt the US attack on Syria/Russia.

(6) The US Joint Chiefs of Staff could easily and honestly conclude that in the event of a Russian response to an attack on Syria, the entire flotilla could be lost, carrier included, inflicting a humiliating defeat on US arms, and that in view of this possibility, the Joint Chiefs recommend against the announced attack. Possibly this has occurred and explains Trump's latest tweets, which suggest that doubts might have entered Trump's mind.

Even if a hopeful outcome such as (5) and (6) occurs, we are left with the dangerous situation that some elements in the US and UK governments were able to orchestrate two events -- the alleged Skripal poisoning and the alleged Assad chemical attack -- and use the events to leverage unsupported accusations against Russia and Syria as justifications for an illegal military attack on a sovereign country. That such an outrageous orchestration is possible proves that there is no democracy or constraint on government in the US and UK.

Related Topic(s): Aircraft; Assad; Confrontation; Submarines; Syria; World Issues; World War III, Add Tags
Add to My Group(s)
Go To Commenting
The views expressed herein are the sole responsibility of the author and do not necessarily reflect those of this website or its editors.