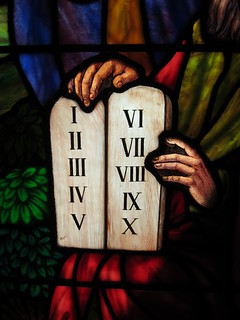 Although the 10 Commandments expressed in the Hebrew Bible were written for a particular people at a particular time, they contain a universal ethic, which can be summarized in the so-called Silver Rule, namely: Do not do to others what you would not want them to do to you.[1]

Because of changing circumstances, which bring new problems, the Silver Rule always needs to be reformulated for the most urgent ethical problems of the time. Today, the overriding ethical problems arise from the climate change caused by global warming, which is depriving people around the world from some of their most basic rights.

The Declaration of Independence, which is foundational for the United States, includes the right to life among the basic human rights. This right implies a right to all those things that are essential to life, such as food, water, and clean air. But the fossil-fuel corporations have been robbing people of these rights.

1. Thou Shalt Not Ruin Civilization's Climate.

Civilization emerged about 10,000 years ago, after the emergence of the Holocene epoch, which was the "Goldilocks zone" for civilization: not too hot, not too cold. That ideal climate existed because the level of carbon dioxide (CO2) in the atmosphere hovered around 275 parts per million (ppm).

However, since the rise of the industrial age, based on fossil-fuel energy, the level of CO2 has been rising steadily, so that now it is above 400 ppm. This increase has already caused the planet's average temperature to rise 0.85 degrees Celsius (1.5 degrees Fahrenheit), and the CO2 in the atmosphere is already fated to push the temperature up further, because there is a lag -- most recently estimated to be about 10 years - between the CO2 emissions and the effect on the temperature. [2]

David Ray Griffin is emeritus professor of philosophy of religion at Claremont School of Theology and Claremont Graduate University. He has written 30 books. His most recent book is Unprecedented: Can Civilization Survive the CO2 Crisis? (Clarity (more...)

Related Topic(s): Civilization; Climate; Corporations; Drought; Energy; Flood; Glaciers; Other; Rights; Storms; (more...) Weather, Add Tags  (less...)
Add to My Group(s)
Go To Commenting
The views expressed herein are the sole responsibility of the author and do not necessarily reflect those of this website or its editors.

STAY IN THE KNOW
If you've enjoyed this, sign up for our daily or weekly newsletter to get lots of great progressive content.
Series: "Ten Commandments for a Climate-Threatened World:"

Climate Economists: Global warming will create "an environment so hostile...

Ten Commandments for a Climate-Threatened World: The First Five