In January 2004 I wrote an open letter to Dennis Kucinich, Ohio Congressman and then-presidential candidate. I have reprinted the letter at the bottom of this post. The gist was you can tell no lies and still not tell the truth. Here is the closing:

Americans reading this letter should begin expecting--causing--the very context of our national debate to be broadened. Dennis Kucinich, you have a deeply held belief that your destiny is to lead the world. Please recognize that the only way to fulfill this magnificent potential is to change the system with truth telling.

Even at that time, before I ever started blogging, my writing exhibited what I later proactively embraced and described as advocacy journalism, defined as writing whose success can only be judged by its ability to produce the real world change being written about. With that in mind I have documented my community and online organizing efforts in more than 500 essays in the GuvWurld and We Do Not Consent blogs. I have developed various memes and recurring themes, though this truth-telling frame had been somewhat dormant before recently storming back in yet another open letter, this one to the media, from the media. What a difference four more years of fascism makes! This time dozens of people as well as organizations are signing on to the call for truth-telling: "federal election results are unprovable, even though the media reports them as fact." Some notable names added since my last posting: filmmaker David Earnhardt, economist Catherine Austin Fitts, Co-Executive Directors of VotersUnite.org John Gideon and Ellen Theisen, BlackBoxVoting.org founder Bev Harris, and scholar Steven F. Freeman, PhD. I'm trying to keep WDNC current and in sync with (or ahead of) Scoop's tremendous effort. The next thing I hope to see is supporters of the letter using their media access to expose and explore the central question and themes of the letter: are federal election results provable?, and if not, should we accept corporate media reporting unprovable results as fact? Let's be clear. The open letter from the media to the media states its intention "to change the corporate media narrative." By my definition this is advocacy journalism, though you can call it whatever you want. As I wrote last Friday in How To Disarm Weapons of Mass Deception, if we recognize the corporate media as harmful weapons of mass deception, then our strategies have to account for dealing with a weapon. If we are ruthlessly honest, we recognize the necessity and correctness of protecting ourselves, and where possible, using the media weapon to our advantage ("beat the media at their own game"). It is a classic self-defense justification, though another key reason also supports this approach. Classic tenets of journalism call for objectivity and neutrality. These are antiquated principles no longer universally observed, especially by the corporate media component of the fascist apparatus - the weapons of mass deception. We must absolutely not feel bound by them. If we are ever to create meaningful change, I believe advocacy journalism will be a crucial element to enable the necessary organizing. It is therefore very important that we learn how to be successful advocacy journalists, whether embracing the label or not. In fact, it hardly matters if other people self-identify with or adopt my definition of advocacy journalism. What counts is the ruthless honesty, ensuring consistency between how we say we see something and how we act about it. We can disarm weapons of mass deception by supplanting its fabricated reality with what is really going on. The burden is two-fold, falling to truth-tellers both inside and out of the media. If you don't work in the media, use your voice to encourage those who you watch, listen to, or read to use their platform to address the content of the open letter to the media, from the media. Remind the truth-telling media makers of things they have said or written to help make sure they remain consistent (ruthlessly honest) now. Media truth-tellers who have enjoyed support and popularity among progressives have reached a sort of "put up or shut up" moment. Nobody is suggesting they be silent. Putting up means telling the truth, the whole truth, and nothing but the ruthlessly honest truth. Those who recognize electronic voting machines have brought us secret vote counting know federal election results are inherently inconclusive and unprovable. Say this now and don't stop. Your audience, your country and your planet need this leadership and will follow as we crash through the finish line of this presidential horse race next week. Those who can't go there may be telling no lies and still not telling the truth.
* * *
I was in San Francisco last weekend and spent part of Saturday passing out the leaflet below. I offered it to passersby with the greeting, "Will you help us take down the corporate media...from the inside?" 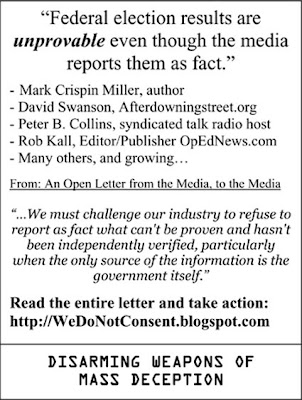 (Image by Unknown Owner)   Details   DMCA
Click for printable version (4 per page) * * *
An Open Letter 1/31/04 To Rep. Dennis Kucinich, D-OH: Congressman, I admire the positive vision you have articulated as the basis for your presidential campaign. Compared to other candidates, the positions you have taken most closely reflect my own. Most importantly, you have taken to re-framing issues as when Ted Koppel inasmuch as told you to drop out of the race or when Wolf Blitzer recently asked if you would consider being a Vice Presidential candidate. The corporate media of America has done the world a disservice by injecting its own agenda, shielding us from the truth, and perpetuating lies that manipulate public opinion. You are courageous and wise to address this. While I am sincere in offering these compliments, they do not represent grounds on which I can support your campaign. Your stated positions may reflect my views, but what you are not saying ensures that America will continue to ignore many of the root causes of her dysfunction. When I talk with progressive Americans volunteering on your behalf, there is an emphasis on convincing people you are electable. I want to believe. But sir, there is a system in place to ensure you lose. The only way for you to win is to change the system. This must not be a euphemism. The lack of truth telling is an obvious place to start. This problem pervades the White House, Congress, the media, and even the very premise of America. We are supposed to be about democracy and capitalism, Darwinian free markets where the "fittest" ideas get elected and survival means competing for more market share. The idea of a free market is central to both our political and economic systems. But to tell the truth, in America today, there is no free market and both democracy and capitalism are a myth. Unless this stark assessment becomes part of our national dialog through your campaign, you may not be telling lies, but you won't be engaged in truth telling either. If democracy, the free market of ideas, genuinely existed in America today, third party candidates could be taken seriously and their ideas would compete fairly in the arena of public opinion. Even as an elected member of Congress, anti-competitive treatment is hindering the exposure that you and your platform need (and are entitled to!). Election methods have clearly become both unreliable and untrustworthy, with disenfranchisement rampant and major campaign donors running voting machine companies. This description applies to America but does not depict democracy. On the economic side, fraud riddles Wall Street in collusive stock and bank deals; Halliburton gets no-bid contracts; mergers that kill jobs and consumer choices are rubber stamped for approval; industry leaders cycle between top lobbying positions and Cabinet appointments; and then there's the media. Consolidation has limited the breadth of viewpoints aired and promoted bald-faced lies to launch wars. It's no wonder democracy and capitalism have both corroded when media companies have financial stakes in topics of their coverage. None of this has been an accident. George W. Bush and the Republican takeover of Congress have accelerated the demolition of American ideals in the last three years. But the Democratic Party is complicit. Of the many ways this is true, the most important is found in the way Democrats and Republicans openly and aggressively seek to maintain the two-party system. Such a contrived power-sharing model violates the spirit of anti-trust laws. It cannot be more plain: the Democrats are harmful to America. The "Anybody But Bush" crowd is large and vocal right now, indicating the inherent potential energy behind a genuine system changing movement. It is imperative that these people (especially the editors of BuzzFlash.com) come to recognize that electing any of the current Democratic candidates will not bring the restoration of democracy but rather perpetuate the myth that it exists. This message must resonate through their defensive gesticulation that this is no time for division among progressive voices for change in America. I keep hearing the phrase "how much change are you ready for?" It has to be enough to change the system. Congressman, discussing the myth of democracy and capitalism is only an introduction. This shift will re-frame progressive dialog from a focus on symptoms to a genuine examination of the disease. Extended further, Americans engaged on this topic makes for a great first step towards changing the system, a prerequisite for you to win the White House. The central theme returns: not telling lies is not the same as truth telling. Jolting America's perception of reality will require busting other myths. Tell us the whole truth: corporations have more rights than humans and we must abolish corporate personhood; the Earth has exhausted its capacity for yielding profitable oil, and the calamitous destiny of "Peak Oil" must be addressed to be avoided; the obstruction of a complete 9/11 investigation shields the unsupportable collection of lies that comprise the official narrative; and no society has ever been able to trade freedom for security. Be the leader we need and help America come to terms with the facts. Demonstrate that we need more than just a regime change, we need to re-calibrate our national compass to pursue rather than destroy the ideals of our Constitution and Declaration of Independence. Use these powerful documents. It is remarkable what a reading of the Declaration reveals. Our Founders didn't just predict future revolutions, they outlined the grounds that should trigger them. As Americans accept Orwellian contradictions, virtually all of these conditions exist today. Americans reading this letter should begin expecting--causing--the very context of our national debate to be broadened. Dennis Kucinich, you have a deeply held belief that your destiny is to lead the world. Please recognize that the only way to fulfill this magnificent potential is to change the system with truth telling. In Respect and Peace, Dave Berman Eureka, CA
# # #
Permalink: http://wedonotconsent.blogspot.com/2008/10/telling-no-lies-and-still-not-telling.html

Dave Berman, C.Ht. has extensive training and experience in Hypnosis, Neuro-Linguistic Programming (NLP) and Life Coaching. He is also a Certified Laughter Yoga Leader, Ivy League graduate (B.S. in Communication from Cornell University), and a (more...)

Book Review: "am I being kind" by Michael J. Chase

Slacker Uprising? Not in the Charlie Brown Nation.