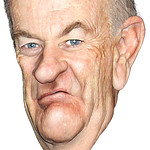 Noted sex pest Bill O'Reilly has now joined the chorus of conservative tongue-waggers denouncing the high school students who are seeking some mild gun control measures that might reduce in some small measure the likelihood of their being shot to death while going to class. Some conservatives, like Trump's friend and adviser Alex Jones, are even claiming that the young people speaking out aren't really survivors at all, but "crisis actors" hired by nefarious secret forces whose sole aim is to make soft and paunchy white guys like Alex Jones feel all wiggly and emasculated because they might not be able to wrap their fingers around every single piece of the big hard steely weaponry they need to fondle to make them feel like a man. (Of course, if they didn't hate women so much, they might not need these machine-tooled allurements to get them juiced enough to feel all musky and masculine.)

But -- so far -- O'Reilly is taking the more "respectable" line of conservative attack against the students; i.e., that they're just "kids," hormone-addled whippersnappers who jejunely believe that their elected officials should do something -- anything, even the slightest action -- to stem the blood-red tide of of senseless slaughter surging through their school halls. They're simply too young to be "politicizing" the issue with their protests and petitions and marches and what all. They lack the calm and well-steeped wisdom of age, the time-leathered sagacity that knows that life is tragic, full of wrong and sorrows that cannot be wished away -- and certainly not legislated against.

Of course, some matters are more amenable to regulation -- such as, say, a woman's reproductive process or a transgender person's toilet needs or the use of a herb that grows in the ground. But the idea that a democratic government could actually follow the wishes of the majority of its citizens (66%) and ban the sale of -- or at least restrict access to -- rapid-fire weapons which serve no other purpose than the instant death of many human beings ... why, that is just a folly of youth.

No, the wise person knows that evil is with us always, even unto the end of the world; you can't stop it with a law. Now, it's true that robbery is with us always, too, but that doesn't stop any government from passing laws against it. Human beings are always going to commit murder -- but conservatives don't seek to repeal the murder laws. (Indeed, they want to make them even harsher.) There are always going to be reckless drivers, but we still have traffic laws. In fact, the ineradicable presence of evil in our tragic world is the very reason we have laws in the first place: to try to reduce it, mitigate it, lessen its impact as best we can.

But for some strange reason beyond the ken of mortal kind, none of this applies to guns. Here the stance is this: Since you cannot eliminate entirely the possibility that someone might use a gun for evil purposes, then you shouldn't put restrictions their sale or use or availability. We can regulate cars, we can regulate truck tonnage, we can regulate drugs (banning some, restricting others), we can regulate which age group can see which kind of movie; we can regulate and pass laws on virtually every activity, object and substance under the sun, even if none of these laws can completely stop these elements from sometimes being misused for sinister purposes. But again, this universally applied principle seems to have only one exception in minds of our modern conservatives: guns.

And so the Parkland High students -- almost all of whom are only months or weeks or days away from being old enough to go fight and die in one of the endless, winless wars and "interventions" their wise elders keep perpetrating -- are being derided, mocked, undermined and insulted for trying to bring any change at all to our gun laws. They're too young to be making these kinds of political choices, conservatives say. (And again, this applies only to guns. If these same students were agitating for greater restrictions against, say, drug abuse, or if they were holding rallies to back a war against North Korea or to support President Trump in his fight with federal investigators, conservatives would be lauding their precocious wisdom and praising their participation in political life.)

But back to the sex pest. As noted, O'Reilly is, for now, on the milder side of the student-bashing spectrum, the head-shaking, tut-tutting, more-in-sorrow-than-in-anger gang. (Although we should note that both the berserkers like Jones and the "Establishment" figures like O'Reilly have the same goal: throttling any move for more regulation of gun sales.) So today, Bill put down his loofah for a minute and gave us a tweet on the subject of the Parkland students' activism:

"The big question is: should the media be promoting opinions by teenagers who are in an emotional state and facing extreme peer pressure in some cases?"

This is pretty rich coming from a man who built a multimillion-dollar career out being "in an emotional state" on a permanent basis, including years of red-faced rants about an imaginary "War on Christmas" being waged relentlessly by nefarious secret forces who were largely, as Bill always implied, adherents of a certain religion other than Christianity. In fact, given his uncontrollable emotionality and his crude sexual obsessions, there is almost no one in public life more like an adolescent than O'Reilly. (And no, the president doesn't count; he's more like an infant whose brain has been accidentally placed in a lumbering husk of a body: "Wrong one, Igor!!")

Anyway, as is well known, the use of Twitter encourages calm and reasoned debate, an elevated level of political and philosophical discourse not seen on this benighted globe since the zenith of Ancient Greece or the high and palmy days of Rome. And so, striving mightily to maintain this noble tone, I answered O'Reilly's question thusly:

"No, Bill, they should have more flabby grabby old guys flapping their jowls and dribbling bile in a cascade of bullshit that will ALWAYS end in a grubby ejaculation of NRA boilerplate aimed at continuing the slaughter of our children. That IS the answer you're looking for, right?"

OK, so it ain't Cicero, but come on. You don't use fine linen to wipe up muck; any handy rag will do.

Related Topic(s): Conservatives; Guns; NRA; Slaughter; Student Politics, Add Tags
Add to My Group(s)
Go To Commenting
The views expressed herein are the sole responsibility of the author and do not necessarily reflect those of this website or its editors.