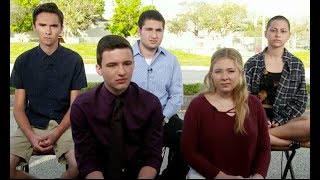 In less than a week after a gunman massacred 17 at their school, teen survivors from Florida's Parkland High School have emerged as the gun control activists of our time, inspiring widespread support.

Parkland survivor Emma Gonzalez gave a passionate call to action at a gun control rally just a couple of days after the killings at her school. The video went viral.

Surviving teens, Cameron Kasky, David Hogg, Alex Wind and Jaclyn Corin, along with Emma, began planning the "March for Our Lives" rally, to take place in Washington DC on March 24. They put up a website.

George and Amal Clooney announced that they would attend the march and donate half a million dollars to the cause. Their contribution was quickly matched by Steven Spielberg and Kate Capshaw, Jeffrey and Marilyn Katzenberg, and Oprah Winfrey .

Former Ohio Congressman, Ohio gubernatorial candidate Dennis Kucinich held a gun control rally with his running mate, Tara Samples, just a couple of days after the shootings. They quickly developed downloadable legal tools for activists to use in their local governments, which are already available on the campaign website. At Kucinich's rally he said " I believe we are at a tipping point in this issue, I think that all over America people sense the time has arrived to take action."

The website already offers March for Our Lives logo T-shirts, and notes that they are working on a toolkit which they will offer activists.

These teens have embraced action with a passion. I don't think either our government or the NRA has a whisper of a chance against them.

Related Topic(s): Emma Gonzalez; Gun Control; Kucinich; March; NRA; Shootings, Add Tags
Add to My Group(s)
Go To Commenting
The views expressed herein are the sole responsibility of the author and do not necessarily reflect those of this website or its editors.