Click Here to Remove All Ads
The tea party senator declared that "virtually every person" in the US has seen health insurance premiums rise due to the new law. Tweeps across the land say otherwise. 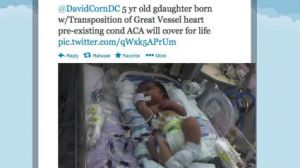 
On Wednesday afternoon, as news was spreading that House Speaker John Boehner had surrendered and a no-conditions-attached bipartisan plan to end the shutdown and debt ceiling crisis would be approved later in the day by the Senate and House, Sen. Ted Cruz (R-Texas), the tea party's disrupter-in-chief, held an impromptu press conference in a Capitol hallway to declare victory, or something like it. The fellow who led the GOP further into a PR abyss hailed the political crisis that was ending (at least for now) as "a remarkable thing" and claimed that it showed that "millions upon millions" had risen up against Obamacare. Then Cruz, the tail that wagged the Republican dog, launched into a diatribe against the Affordable Care Act: "President Barack Obama promised the American people Obamacare would lower your health insurance premiums. I would venture to say that virtually every person across this country has seen exactly the opposite happen, has seen premiums going up and up and up."

Please go to Mother Jones to read the rest of this article.

David Corn is  Mother Jones ' Washington bureau chief. For more of his stories,  click here . He's also  on  Twitter  and  Facebook .  RSS  |  TWITTER  David is (more...)
Related Topic(s): Obamacare; Republican; Shutdown; Ted Cruz, Add Tags
Add to My Group(s)
Go To Commenting
The views expressed herein are the sole responsibility of the author and do not necessarily reflect those of this website or its editors.