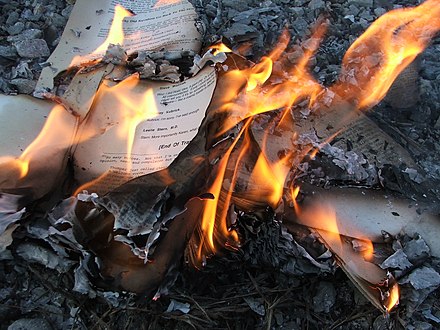 We are fast becoming a nationnay, a worldof book burners.

While on paper, we are technically free to speakat least according to the U.S. Constitutionin reality, however, we are only as free to speak as the government and its corporate partners such as Facebook, Google or YouTube may allow.

That's not a whole lot of freedom. Especially if you're inclined to voice opinions that may be construed as conspiratorial or dangerous.

Icke, a popular commentator and author often labeled a conspiracy theorist by his detractors, recently had his Facebook page and YouTube channel (owned by Google) deleted for violating site policies by "spreading coronavirus disinformation."

The Centre for Countering Digital Hate, which has been vocal about calling for Icke's de-platforming, is also pushing for the removal of all other sites and individuals who promote Icke's content in an effort to supposedly "save lives."

Translation: the CCDH evidently believes the public is too dumb to think for itself and must be protected from dangerous ideas.

This is the goosestepping Nanny State trying to protect us from ourselves.

In the long run, this "safety" control (the censorship and shadowbanning of anyone who challenges a mainstream narrative) will be far worse than merely allowing people to think for themselves.

Journalist Matt Taibbi gets its: "The people who want to add a censorship regime to a health crisis are more dangerous and more stupid by leaps and bounds than a president who tells people to inject disinfectant."

Don't fall for the propaganda.

These internet censors are not acting in our best interests to protect us from dangerous, disinformation campaigns about COVID-19, a virus whose source and behavior continue to elude medical officials. They're laying the groundwork now, with Icke as an easy target, to preempt any "dangerous" ideas that might challenge the power elite's stranglehold over our lives.

This is how freedom dies.

It doesn't matter what disinformation Icke may or may not have been spreading about COVID-19. That's not the issue.

As commentator Caitlin Johnstone recognizes, the censorship of David Icke by these internet media giants has nothing to do with Icke: "What matters is that we're seeing a consistent and accelerating pattern of powerful plutocratic institutions collaborating with the US-centralized empire to control what ideas people around the world are permitted to share with each other, and it's a very unsafe trajectory."

Related Topic(s): Censorship; Orwellian; Surveillance; Totalitarianism, Add Tags
Add to My Group(s)
Go To Commenting
The views expressed herein are the sole responsibility of the author and do not necessarily reflect those of this website or its editors.