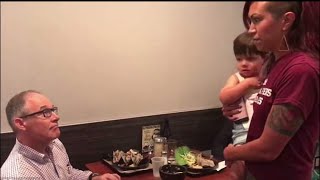 Kristin Mink, a schoolteacher and mother of a 2-year-old, confronted Scott Pruitt, the embattled administrator of the U.S. Environmental Protection Agency (EPA), at a restaurant in Washington, D.C., on Monday and urged him to resign.

In a video of the incident posted onto Facebook, Mink introduces her toddler to the EPA boss before she recites his extensive record of deregulating environmental protections and numerous scandals.

Pruitt, who was dining with a companion, is silent during the exchange.

Mink continues, "We deserve to have somebody at the EPA who actually does protect our environment, somebody who believes in climate change and takes it seriously for the benefit of all of us, including our children. I would urge you to resign before your scandals push you out."

Mink's Facebook profile shows she's a teacher at Sidwell Friends School. Pruitt, his companion and two security guards "fled" the restaurant after the exchange, according to Mink.

"EPA head Scott Pruitt was three tables away as I ate lunch with my child," she wrote in a caption accompanying the video footage. "I had to say something. This man is directly and significantly harming my child's -- and every child's -- health and future with decisions to roll back environmental regulations for the benefit of big corporations, while he uses taxpayer money to fund a lavish lifestyle."

She added, "He's corrupt, he's a liar, he's a climate change denier, and as a public servant, he should not be able to go out in public without hearing from the citizens he's hurting."

President Trump's EPA administrator, who infamously said carbon dioxide is "not a primary contributor" to climate change, has delayed, weakened or done away with critical EPA standards that protect our air, water and land.

Pruitt is also facing more than a dozen federal inquiries over his cozy relationships with industry leaders. Among his numerous controversies, he rented a Capitol Hill condo for $50 a night -- well below market value -- from the wife of a fossil fuel lobbyist. He also has a penchant of flying first class on the taxpayer dime.

"Administrator Pruitt always welcomes input from Americans, whether they agree or disagree with the decisions being made at EPA," Ferguson said in a statement sent to USA TODAY. "This is evident by him listening to her comments and going on to thank her, which is not shown in the video. His leaving had nothing to do with the confrontation, he had simply finished his meal and needed to get back to EPA for a briefing."

Related Topic(s): Climate; Confrontation; Environment; Scandals; Scott Pruitt, Add Tags
Add to My Group(s)
Go To Commenting
The views expressed herein are the sole responsibility of the author and do not necessarily reflect those of this website or its editors.