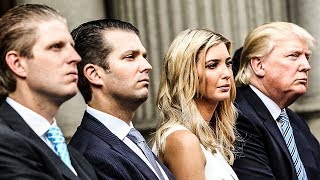 Trump Family To Save $1 Billion Under New Tax Plan
(Image by YouTube, Channel: The Ring of Fire)   Details   DMCA

If you're one of the Americans who will soon be paying more in taxes should Senate Republicans follow the lead of House Republicans in passing their latest version of rich person-centric tax "reform," rest assured that your money won't be going to waste. Why, some of it will be going to the noble White House effort to defend Donald Trump's private for-profit businesses from lawsuits.

"Taxpayers are footing the legal bill for at least 10 Justice Department lawyers and paralegals to work on lawsuits related to President Trump's private businesses.

"Neither the White House nor the Justice Department will say how much it is costing taxpayers, but federal payroll records show the salaries of the government lawyers assigned to the cases range from about $133,000 to $185,000."

That's right, everybody. Your tax dollars are now going to an effort by the Justice Department to protect Donald Trump from the fallout of his own refusal to divest from his for-profit companies while serving as "president."

Why can't Donald Trump fork over this money himself? Why can't the businesses he continues to own pay to defend Trump themselves? Because it's f--k you, that's why. Donnie Boy wants his hard-earned bribes and is now in a position to order his own administration's lawyers to defend them.

"In the cases, Justice Department attorneys are not defending policy actions Trump took as president. Instead, the taxpayer-funded lawyers are making the case that it is not unconstitutional for the president's private companies to earn profits from foreign governments and officials while he's in office."

This is a tired trope, at this point, but imagine if you will the response of every last Republican if it was the position of either Barack Obama or Hillary Clinton that the president could, for example, open an "Obama International Hotel" a short way from the White House and let it be known that if you were an important international visitor and just happened to need a place to stay that, by golly, here's a place you could pay your cash to.

Related Topic(s): Lawsuits; Republican; Taxpayers; Trump Children; Trump Tax Plan, Add Tags
Add to My Group(s)
Go To Commenting
The views expressed herein are the sole responsibility of the author and do not necessarily reflect those of this website or its editors.