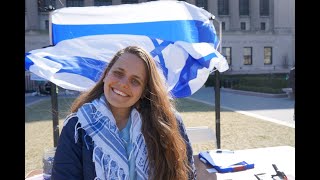 For those readers who have been with me for a while, you might remember the mysterious fact that I am on the e-mail list of the American Jewish Committee (AJC). The AJC is one of the principal Zionist advocacy organizations in the United States. There is some advantage to this odd situation because it serves to alert me to the often misleading positions the organization takes.

Recently, I got an e-mail (I was unable to establish a link to this message) from Seffi Kogen, the "AJC Global Director of Young Leadership." He asked the question, "What is it like being Jewish on [a U.S.] Campus?" Based on what appears to be a small sample ("a group of Jewish students at a prestigious American university"), Kogen comes to the conclusion that all is not well. The students' answers to this question were "disturbing."

From this apparently small sample, Kogen feels ready to generalize the following "reality":

"They have been tormented and intimidated."

"They have been bullied during anti-Israel boycott and divestment campaigns on campuses across the country."

Well, that is a big leap on several accounts. Is this a random sample of Jewish students or a select group chosen because they are Zionists? How many are in the sample? Is there any reason to assume that this group is representative of "Jewish students on campus" nationwide? Also, you don't have to be Jewish to be pro-Israel, and conversely it is the case that not all Jewish students are pro-Israel. Yet, Kogen seems to be mixing up the different groups: Jewish students in general and Jewish student supporters of Israel. What he certainly seems to be doing is committing a logical fallacy known as "hasty generalization" or "arguing from small numbers."

Having asserted a logical fallacy as the basis of campus "reality," Mr. Kogen tells us that all members of the AJC should financially support the organization's continuing effort to, among other things, "bring university presidents and student affairs officers to Israel to learn the truth about this country that means so much to all of us." This, in turn, will supposedly motivate them to be hostile to students who support Palestinian rights and the boycott of Israel.

Part II -- Just Who Is Intimidating Whom?

Later, we will take up some student-related truths that guests of the AJC in Israel are unlikely to learn, but right now let's stay with Mr. Kogen's stateside assertions.

What Kogen conveniently omits is that pro-Israel students, often aided by foreign students who are Israeli army veterans, are themselves acting in an intimidating, harassing and bullying ways. For instance, members of the Students for Justice in Palestine chapter at the University of California Irvine assert that they "were subjected to days of racial and sexual slurs in what they believe was an attempt to provoke a reaction."

Then there is the fact that pro-Israel college administrators, with or without all-expenses-paid trips to Israel, and often backed by officials of U.S. state and federal governments, also harass and intimidate student and faculty supporters of Palestine. Palestine Legal , an organization of American lawyers who defend the First Amendment rights of those who support the Palestinian cause, reports the following: "In blatant disregard of the First Amendment, government actors have increasingly had a direct hand in censoring Palestine advocacy. This censorship originates at all levels of government " [and includes] administrators at public universities, and both Democratic and Republican state governors. These actions have also empowered anti-Palestinian groups."

Related Topic(s): Jewish; Palestinian; Pro-israel; Student Politics; Student Thugs; Truth; Universities, Add Tags
Add to My Group(s)
Go To Commenting
The views expressed herein are the sole responsibility of the author and do not necessarily reflect those of this website or its editors.