"One of the things that we have not talked about as a system is the harmful effect of special education."
- Marco Tolj, LAUSD Division of Special Education


Marco Tolj is the Director of the LAUSD's Division of special education and is, therefore, responsible for ensuring that these services help students to reach their full potential. If any part of these programs is "harmful," then it is the responsibility of Tolj and his team to make the needed adjustments so that the system performs better. This solution should never involve denying services to students who are in need.

As an example of how special education might be harmful, Tolj mentioned students who have one on one aides to assist them during the school day. He maintained that some of these students "felt that they were always being watched" during breaks and, therefore, had a difficult time socializing. Taking away this aide would solve the problem but would also mean that the student had no assistance during the rest of the school day. A better solution to this problem would be to ensure that the BII (Behavioral Intervention Implementation) Specialist is trained to recognize that the student needed more independence and work with the IEP team to develop a plan towards that goal.

Tolj also warns that we should be cautious about "giving the kids that stigma" of being provided with special education services. He says that such a diagnosis is "limiting" and gave the example of those needing services for having an emotional disturbance (ED) being unable to serve as police officers or in certain jobs in the military. What he did not talk about was how students can be permanently harmed if the district shies away from providing a proper diagnosis. Without access to needed services, these students are more likely to fall behind their peers, drop out of school, and enter the school to prison pipeline. Despite being "spared" the ED diagnoses, they will still not be able to serve as a police officer.

Caving in to prejudices against those receiving special education services is not the answer. Instead, the district needs to do its part to educate society about the obstacles that these children face. This should start with students enrolled in the LAUSD's own general education program. 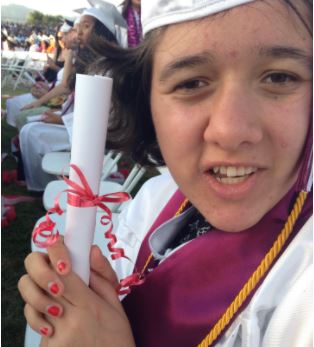 My daughter received her Certificate of Completion alongside her classmates
(Image by Carl J. Petersen)   Details   DMCA
Kennedy High School in Granada Hills provides a perfect example of how our schools can build empathy towards children with special education needs. Special education and general education teachers have worked closely together so that inclusion occurs in a meaningful way. A peer buddy system allows the groups of students to mix in a supervised setting giving general education students the opportunity to get to know their classmates with special needs.

Unfortunately, this program is being jeopardized by a principal who does not understand that successfully providing an education that is special requires constantly thinking outside the box. Our daughter's teacher was able to push her to accomplish things we never thought possible, but the teacher was constantly harassed for not following lesson plans or demanding that her non-verbal students answer in complete sentences. "Experts" from the district even had her rearrange her classroom for better effectiveness ignoring the fact that children on the autism spectrum require consistency. The disruptions caused by the bureaucrats triggered her students causing them to act out, which degraded the learning environment.

The principal at Kennedy is not supporting the highly successful program at his school because it has not been prioritized by those at the district who are in charge of overseeing special education. As the department's Director, Tolj is supposed to advocate on behalf of the district's most vulnerable students, but he instead pushes a system where the goal is to "support and move kids" out of these services like they are widgets on an assembly line. With this type of advocacy, is it any wonder that children in these programs feel stigmatized and their teachers feel underappreciated?

We need to put people in charge of special education whose goal is not to remove services as quickly as possible but to ensure that every child in the district has an opportunity to achieve their full potential. Providing an education that is special and tailored to each child's individual needs will then be seen as typical and not something that should be avoided.
________________________________

Related Topic(s): Special Needs Children, Add Tags
Add to My Group(s)
Go To Commenting
The views expressed herein are the sole responsibility of the author and do not necessarily reflect those of this website or its editors.