For those of you who might not know (and I should think that most political types would, given the massive publicity on media of all stripes the event gets) something called the Conservative Political Action Conference (CPAC) took place recently. It was funny, because when I heard about this year's event I thought "wait a minute; didn't they have one of these of few months ago?" No, I'm not losing it yet. That's just some evidence as to exactly how much the annual shindig is talked about.

And so I looked up this year's event and came across a Rightist website called The Daily Signal. (Sorry, folks, I am just no longer calling the folks who go to these things and their related media and political figures "conservatives." They ain't. Actually, for example, in terms of wanting to preserve and conserve what is left of the Earth as a result of the depredations of capitalist imperialism, it is we Leftists who are the conservatives. "Reactionary" is a bit old-fashioned, so I'm going with the simple descriptive, "Rightist.") Anyway, The Daily Signal ran a feature called "25 Takeaways from America's Biggest Conservative (sic) Conference." It is fascinating to see what Rightists take away from a Rightist conference. But for the most part following their order, I thought to note down what I took away, first from parts of their "Top 25," and then from perhaps a few observations of my own. 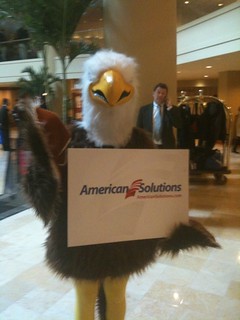 I wish this bird would tell us which solutions CPACees have to what problems. They surely don't.
(Image by AmericanSolutions)   Details   DMCA

First, Scott Walker. Although his "trade-unionists are the equivalent of ISIS terrorists" remark was first widely reported as a gaffe, and he may have backed away from it a bit, believe me, deep down inside (which is where the remark came from) this very successful Rightist politician (he won three elections in four years in a supposedly "blue" state) bleeds Koch Brother royal blue from his veins. For the Kochs, that tiny percentage of the US workforce that is still unionized is one of their biggest enemies. And it is Walker's too.

Next came Ted Cruz. For a long-time I have been writing about the "Rightward Imperative" of the Republican Party, that is their need to move ever-further to the right in their rhetoric to make sure that they cover up what their real programs are. Cruz is perhaps the ultimate practitioner of it, now. Except remember that once upon a time Bob Dole was considered to be about as far right as one could get in the Republican Party. I can't wait to see who comes along to outflank Cruz. Phil Robertson?

Then there was Ben Carson. (I must say that given that the modern Republican Party runs on racism I have always found it puzzling that African-Americans would associate themselves with it, and given that the same Party also runs on homophobia I have always found it puzzling that gays and lesbians would associate with it too. By the way, the CPAC organizers banned the Log Cabin Republicans, the biggest gay organization within the GOP, from attending this year. But then again, in the early days of Nazism, when their biggest enemies were the German Communist and Socialist Parties, there were assimilationist, right-wing Jewish supporters of Hitler, too). A major contribution of Carson's to the debate on education is to advocate home-schooling as "the best choice" (at least according to The Daily Signal). Of course, the vast majority of home-schoolers are religious rightists who don't want their children "sullied" by being exposed to any contrary ideas and then possibly having thoughts of their own on those matters.

Chris Christie told the crowd (that is anyone who would listen) that he is "not worried." About what, Chris? The fact that while uncontrollable anger may work in New Jersey as one's prime qualification, even most Republicans now don't think that it is a really good qualification for the nation's highest office (and they also know that the Federal investigation of "Bridgegate" ain't over)? Is that it?

Gov. Bobby Jindal of Louisiana, apparently can see the Gulf of Mexico from his office in Baton Rouge as the Mississippi Delta continues to slip away under his stewardship. (Actually, Baton Rouge is not that close to the Delta, but it is slipping away, at the rate of a football field of wetlands an hour.) But anyway, getting all the proper Rightist words in place, this foreign policy expert knows that "We don't need a war on international poverty, we need a war on the evil radical Islamic terrorism."

Rand Paul talked about the need to "defend the whole Bill of Rights." Apparently his brand of "defense" doesn't extend to freedom of choice in the outcome of pregnancy (and I do wish that more lefties flirting with Rand would pay attention to this). Paul is not just for rolling back Roe v. Wade to leave the referable law concerning those personal decisions, religiously-based or not, to the States. This doctor (whose "Boards" in ophthalmology, by the way, were granted by a now out-of-business organization that he founded) on his own website supports the "Life at Conception Act [which] would extend the Constitutional protection of life to the unborn from the time of conception."

Finally, let's leave it with Donald "hair today, gone tomorrow" (sorry, couldn't resist) Trump who is running, so far, on a platform of "I want to do it so badly."

Quite a collection isn't it? Which is why the likely nominee will be JEB "I'm not 'W' " Bush. He's got quite platform too (but we will leave the real JEB Bush for another time).

Steven Jonas, MD, MPH, MS is a Professor Emeritus of Preventive Medicine at StonyBrookMedicine (NY) and author/co-author/editor/co-editor of over 35 books. In addition to his position on OpEdNews as a "Trusted Author," he is a Senior Editor, (more...)
Related Topic(s): African-americans; Bridgegate; Choice; Cpac; Cruz; Education; Reactionary; Republican; Wetlands; Work, Add Tags
Add to My Group(s)
Go To Commenting
The views expressed herein are the sole responsibility of the author and do not necessarily reflect those of this website or its editors.