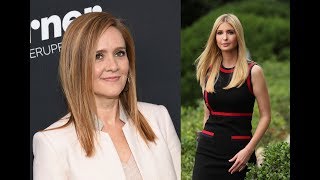 "We spent the day wrestling with the repercussions of one bad word, when we all should have spent the day incensed that as a nation we are wrenching children from their parents and treating people legally seeking asylum as criminals. If we are OK with that then really, who are we?"

Samantha Bee is a smart, talented, funny, incisive, edgy, 48-year-old Canadian/American mother of three. She is also the star of the TBS show "Full Frontal with Samantha Bee," now in its third year. In 2017, Time magazine named her one of the 100 most influential people in the world. On May 31, 2018, the Television Academy's annual awards for "outstanding programs that have leveraged the dynamic power of television to inspire social change" included Samantha Bee's "Full Frontal." The awards ceremony was closed to the media because, in the taped broadcast of "Full Frontal" the night before, in the context of castigating the Trump administration immigration practices, Samantha Bee had called Ivanka Trump a "feckless [taboo word for vagina]," setting off a cultural foofaraw over vulgarity, but without concern for children taken from their parents by government force.

"Full Frontal" was honored especially for its intensely supportive coverage of the #MeTo and Time's Up movements, another policy area where the Trump administration has failed and where Ivanka Trump, as a woman, has apparently been feckless. (On April 5, 2017, Samantha Bee tweeted a show promo promising: "The Greatest Feminists in Feminism Herstory Hall of Lady Fame: Ivanka Trump.")

In the May 30 episode of "Full Frontal," at the end of a seven-minute immigration segment, Bee referred to a posed, sentimental photograph from Ivanka Trump's Instagram page, showing Ivanka holding her son, their faces almost nose to nose, a deliberately charming image. (The page includes considerable commentary, some of it expressing heartless disregard for the children separated from their parents.) Bee juxtaposed this mother-toddler tease with a statement of Trump administration immigration policy and called on the uniquely positioned "special advisor to the president to step up and defend the values implied in her photo:

"After decades of ignoring the issue, Americans are finally paying attention. Well, most of us. Ivanka Trump, who works at the White House, chose to post the second most oblivious tweet we've seen this week. Y'know, Ivanka, that's a beautiful photo of you and your child, but let me just say, one mother to another: do something about your dad's immigration policies, you feckless c***. He listens to you. Put on something tight and low-cut and tell him to f***ing stop it. Tell him it was an Obama thing and see how it goes."

Predictably, the next morning the White House reacted explosively to the taboo word for vagina and ignored the human suffering caused by its immigration practices. At 8:30 a.m. press secretary Sarah Huckabee Sanders said the "language used by Samantha Bee last night is vile and vicious." Then she blurred the issue by claiming: "Her disgusting comments and show are not fit for broadcast," logically equating a critique of government inhumanity with calling someone a feckless taboo word for vagina.

That's a morally indefensible opinion that went largely unnoticed in the hooha over the taboo word for vagina. Sanders also issued an implied call for Time Warner and TBS to fire Samantha Bee, perhaps tortiously interfering with their contractual relationship. It's also very like an unconstitutional call for government censorship. And Sanders did not gracefully let it go at that, but went on to try to make the taboo word for vagina a partisan issue: "The collective silence by the left and its media allies is appalling."

The same afternoon at 2:16 p.m., Samantha Bee tweeted her apology:

"I would like to sincerely apologize to Ivanka Trump and to my viewers for using an expletive on my show to describe her last night. It was inappropriate and inexcusable. I crossed a line, and I deeply regret it."

Well, that seems fair enough, doesn't it? Bee apologized to Trump for calling her a taboo word for vagina, even though that's anatomically correct. But what about "feckless"? Shouldn't she apologize for that, too, since Ivanka Trump, whatever else one may think of her, is hardly feckless as she globe-trots, merchandises out of the White House, and collects Chinese patents at a remarkable rate? Ivanka Trump has apparently not yet responded to Bee's apology. When Trump's initial mother and child photo post appeared on Instagram and she received a hail of negative reaction, she did respond obliquely to that with quasi-religious quotes from Marcus Aurelius:

"If thou workest at what is before thee, following right reason seriously, vigorously, calmly, without allowing anything to distract thee... If thou holdest to this, expecting nothing, fearing nothing, but satisfied with thy present activity according to nature... thou wilt live happy. And there is no man who will be able to prevent this."

That was May 29, when Ivanka Trump also said more directly: "Focus on what is before you, on what you can control and ignore the trolls! Have a great week." The next night "Full Frontal" aired.

At the Television Academy Honors event, having publicly apologized earlier in the day, Samantha Bee described what had happened as she saw it:

"Stories about 1,500 missing unaccompanied migrant children flooded the news cycle over the weekend. So last night we aired a segment on the atrocious treatment of migrant children by this administration and past administrations. Sometimes even the ones who look best in swim trunks do bad jobs with things. Our piece attracted controversy of the worst kind...

"I can tell you, as long as we have breath in our bodies and 21 minutes of airtime once a week, repeats on Saturdays, that we as a show will never stop shouting [about] the inhumanities of this world from the rooftops and striving to make it a better place. But in a comedy way."

The next day, the president doubled down on his press secretary's implied threats, calling for Samantha Bee's firing. TBS has indicated support for Bee, saying she did the right thing in apologizing and also accepting some responsibility for allowing the taboo word for vagina on the air. Fox and fellow festerers continue to call for Bee's scalp. Her program has lost some advertisers, Autotrader (with dishonest, inaccurate comment) and State Farm (with a wishy-washy comment). Neither company took issue with US treatment of immigrants that amounts to a crime against humanity.

The New Yorker has published an entertaining piece explaining that, for centuries, the taboo word for vagina was actually in happy, common usage (in Hamlet's reference to "country matters," for example). Only in the past century or so has the word become taboo and "dirty." The piece also quotes two tweets from contemporary actresses supporting Samantha Bee (edited here for clean living), much to the distress of right-wing virtuecrats.

Vermonter living in Woodstock: elected to five terms (served 20 years) as side judge (sitting in Superior, Family, and Small Claims Courts); public radio producer, "The Panther Program" -- nationally distributed, three albums (at CD Baby), some (more...)
Related Topic(s): Apology; Insults; Ivanka Trump; Samantha Bee, Add Tags
Add to My Group(s)
Go To Commenting
The views expressed herein are the sole responsibility of the author and do not necessarily reflect those of this website or its editors.