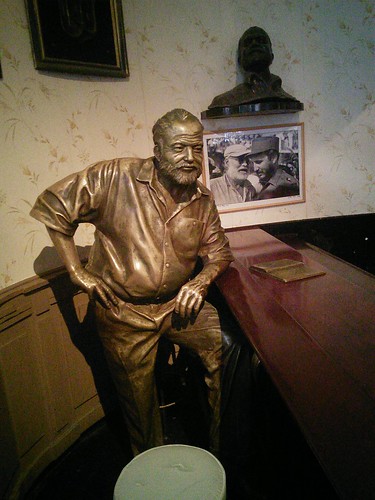 "Why do you read this trash? It is inflated trash, Hemingway. By a dead man."

"I like to see what they are writing," I said. "And it keeps my mind off me doing it."

I was reading (and watching) a hit piece in the New Yorker today that takes the NRA's Wayne LaPierre to task for botching an elephant kill in Botswana eight years ago. "The Secret Footage of the N.R.A. Chief's Botched Elephant Hunt" includes video of the fatal shots; it's nasty stuff, trophy-hunting endangered animals, and when I read that LaPierre's wife, Susan, cuts off the elephant's tail ("Oh, it's like a fish almost, with the center cartilage," she says in the piece) to mark the beast as their kill, it has an anachronistic feel -- and there's nothing romantic about it. When I read that the elephant's front feet were eventually made into stools for fools in the den, I was disgusted that such ostentatious egotism still has legs. Maybe LaPierre lives a cul de sac, I thought, where the houses look like white elephants, everyone with bits and pieces of safari furniture.

Apparently, Mike Spies, the article's author, and a senior writer for the anti-gun online journal, The Trace, was trying to show LaPierre what it's like to be taken down by a boom-gun. Spies, like some Perverted Justice bush sniper, hits point-blank, right between LaPierre's running lights. Like the old elephant in the piece, who wasn't looking for trouble, LaPierre goes down in a heap. BOOM: By Spies account, the head of the NRA is an incompetent boob, a fumble-thumbs with guns, who misses the kill spot repeatedly at close range (presumably something Spies would never do); even the old bull seems to look up at LaPierre with "one dying eye" in wonder. BOOM: Good heavens! the comfortably middle class New Yorker seems to opine, you drove your organization into bankruptcy! Of course, had LaPierre not missed his mark (or had he discovered he was being secretly filmed and executed the cameraman on the spot), we never would have seen the tsk-tsk snuff film or read Spies's hit piece.

You come away feeling that New Yorker, using Spies's Trace blog entry wholesale for the piece (think: Trading Places), has an agenda: Gun control pressure is in the air; Biden's feeling it like a prostate problem. Guns on the loose in America now number in excess of 400,000,000, so that concern is understandable. But the Spies piece got me thinking. Recently, I finished watching the three-part, six-hour PBS mini-series Hemingway, a Ken Burns and Lynn Novick production. And I'll tell you, suddenly I felt like Joan Baez in that old song, "Diamonds and Rust," where she answers the phone and she'll be damned, there comes that voice of Dylan again from "a couple of light years ago." (For the record, the song didn't seem to faze Dylan; he hooked up with his old lover shortly thereafter for the Rolling Thunder Revue Tour -- the ever-relevant Woody Guthrie number, "Deportee," a highlight of their mike-sharing.) Except this time, it's me not Baez, and I find myself considering Hemingway again for the first time in 'a light year.'

Related Topic(s): Catholicism; Crashes; D-day; Eternity; Great_Artists; Hemingway; Leader; Men; Mens Issues; Mental Illness; (more...) Relationships; Time; Trauma; Women; Writing, Add Tags  (less...)
Add to My Group(s)
Go To Commenting
The views expressed herein are the sole responsibility of the author and do not necessarily reflect those of this website or its editors.

STAY IN THE KNOW
If you've enjoyed this, sign up for our daily or weekly newsletter to get lots of great progressive content.
Series: "TV Series Reviews"