Click Here to Remove All Ads
THE UK 2010 PARLIAMENTARY ELECTION WAS A FLORIDA/OHIO STYLE ELECTION NIGHTMARE, WITH THOUSANDS TURNED AWAY FROM THE POLLS.
"Here we are giving an example which would shame countries that are just starting their democracies."~ David Dimbleby with BBC
IS THE UK SET TO MAKE THE SAME MISTAKE THE US DID? THE UK MEDIA CALLS FOR "E-VOTING"! 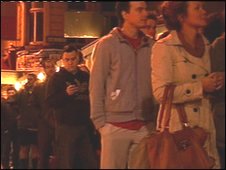 "They should have been prepared for a 100% electorate turning up...everyone should have the right to vote" ~ Anna Sheldrake Disenfranchised voter

Voting electronically could prevent future problems at election polling stations, some experts claim.
...
The 2010 UK election was marred for those unable to vote within the designated time frame, due to long queues.

COMPUTERIZED VOTE COUNTING HAS BADLY DAMAGED U.S. DEMOCRACY.YEARS LATER WE ARE STILL TRYING TO CLEAN UP THE MESS


When will we come to our senses?

VotersUnite is only one of many, many websites full to overflowing with stories of how badly computerized voting equipment has performed, how easily an insider or outsider could hack the equipment to fix an election, and how dangerous to democracy is the country's dependence on concealed vote-counting provided by private, unaccountable voting system vendors.

No hypothetical danger,
computerized vote-counting is a busy intersection
WITHOUT A STOP SIGN,
and the crashes have already been legion.

Flawed and failing computerized vote-counters have been reported in hundreds of news stories, experienced by thousands of voters, caused millions of dollars in official investigations and studies ... and yet the equipment is still in use in virtually every jurisdiction in the United States.

MESSAGE TO THE UK - IF YOU ACT IN HASTE, YOU WILL REPENT IN LEISURE. E-VOTING WILL NOT SOLVE THE PROBLEMS AND WILL MAKE THEM MUCH WORSE. THE US FOUND OUT THE HARD WAY AND 10 YEARS LATER WE'RE STILL CLEANING UP THE MESS OF COMPUTERIZED VOTING.

Voting vendors and non profits already hope to capitalize on the confusion, regrets and finger pointing that follows the 2010 UKElection meltdown. They know how eager politicians are to provide an immediate "solution", even if it makes things worse.

The media is playing the part of InfoMercial, as salespitchmen for the snake oil salesmen who peddle electronic voting and internet voting, and other election "reforms". These "solutions" will make the existing problem with UK elections WORSE.


THE REAL PROBLEM WITH THE UK ELECTION WAS

1. LACK OF PREPARATION,
2. FAULTY VOTER ROLLS,
3. ELECTION LAWS THAT DISENFRANCHISES VOTERS
- VOTERS TURNED AWAY FROM POLLS,
- BALLOTS WERE NOT PRINTED TO 100% RATIO OF REGISTERED VOTERS
- VOTER ROLLS WERE FAULTY, AND
- SOME VOTERS WAITED IN LINE EVEN AFTER POLLS CLOSED BUT WERE NOT PERMITTED TO VOTE.

The headlines below show that the United Kingdom failed to prepare for the election.

Voting News: Online Voting - All That Glitters Is Not Gold. Does your vote count in Georgia?

Why Maryland STILL Does Not Have Paper Ballots