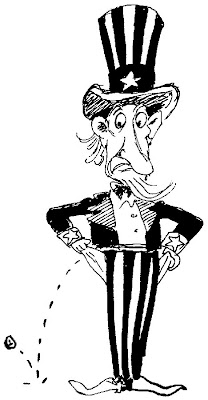 The stimulus package debate rages in the US Senate as a cadre of about 20 "moderate" Republican and Democrat senators (led by our two Maine women Senators Olympia Snowe and Susan Collins) try to cut a $100 billion from the final bill. They say that funding things like Head Start and school construction won't create enough jobs. Really, hiring more teachers and teachers aides and workers to sustainably remodel or build new energy efficient schools won't create jobs? What planet have I been living on anyway?

The funny thing is that few on either side of the aisle are complaining about the $50 billion subsidy for the nuclear power industry that sits in the package.

I thought the whole idea was to create green jobs. We know that investing in alternative and sustainable energy technologies is the best way to create good jobs and deal with climate change.
Building more nuclear power plants is not green jobs. But it is "green washing" as the nuclear industry tries hard to sell themselves as a viable alternative. Obviously it seems to be working with the Congress.

Road building, which is slated to get $30 billion in the stimulus package, is not green jobs. Mass transit is though but is only going to get $10 billion.

So the big change is really small change.

I got a call from Washington last night, and have been getting tons of emails in recent days, from progressive groups telling me to go to the wall for the stimulus package. But I have to admit I am not very excited about the whole process.

Maybe my skepticism comes from looking at the crew that Obama has assembled that he calls his "economic team". To me they look like four retread tires on a car careening off the cliff. But that is just my opinion.

One guy I do respect though is activist and writer David Sirota who is best known for having organized the campaign to get a Democratic senator elected ( Sen. Jon Tester) in the conservative state of Montana.

In a piece today Sirota says, " Obama's economic team is filled with the same deregulating, pro-bailout, pro-NAFTA, pro-outsourcing hacks whose policies brought the economy to its knees. And that's not just at the top levels, as we see, it's all throughout the government's economic bureaucracy. And, of course, the new economic advisory board Obama announced today has just two representatives from organized labor, and is teeming with right-wing economists (Martin Feldstein of the Reagan administration); CEOs from corporate outsourcers (GE and Caterpillar) and Wall Street firms (UBS); and board members from bailed-out investment houses (Laura Tyson from Morgan Stanley). "

So excuse me for not busting my gut with pride and joy over the sausage making going on in Washington over the stimulus. In the end a massive bill will pass and it will essentially do little to change the real dynamic in America that is leading to our economic collapse. And just what am I referring to?

I am referring to the fact that the powers that be have reduced our economic role in the world to one where we build weapons and export violence. We don't make our own clothes anymore nor do we build much of anything else. But we are the world's best at making machines to kill people.
When I hear Obama and the Congress start talking about converting the military industrial complex so that we can build wind turbines, rail systems, a solar society, and the like then I will get really excited about what is going on in Washington.

In the meantime I will keep banging my drum and chanting my mantra - jobs are best created when we go green. And I'm talking real green not the phony baloney stuff that is being pedaled as green these days.