Photo from the war in Libya 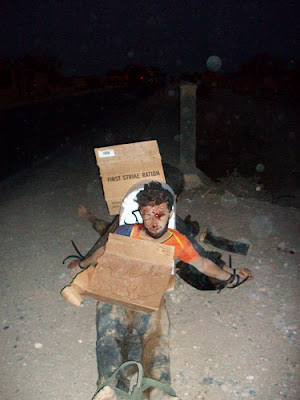 A sign -- handwritten on cardboard fashioned from a discarded box of rations -- hangs around the dead men's necks. It reads: TALIBAN ARE DEAD. According to a source in Bravo Company, who spoke on the condition of anonymity, the men were killed by soldiers from another platoon, which has not yet been implicated in the scandal. "Those were some innocent farmers that got killed," the source says. "Their standard operating procedure after killing dudes was to drag them up to the side of the highway."


You've likely heard about the article in a recent Rolling Stone magazine called The Kill Team. The photo just above is one of those that were discovered when the military finally investigated and are now prosecuting an Army unit deployed in Afghanistan for killing innocent civilians for sport. It's sick stuff.


You'd think these disclosures would force Congress to reevaluate our multiple wars and the damage they are doing to everyone involved but things just roll along. In fact, we are now advancing this global war onto the African continent with the attacks on Libya. The U.S. and our NATO allies love to blow things up and hold ground.


If you listen closely to Hillary Clinton and the Pentagon brass in the last day or so you can hear the sounds of trial balloons being released and seeds being planted into the minds of the American people.


Corporate news bureaus are reporting that "world leaders say Qaddafi must be removed" and the "Obama administration is engaged in a fierce debate over whether to supply weapons to the rebels in Libya." The New York Times reports, "The French government, which has led the international charge against Colonel Qaddafi, has placed mounting pressure on the United States to provide greater assistance to the rebels."


Sending arms would also create the need to send military advisers. Already there can be no doubt that CIA and U.S. and allied "special forces" troops are working inside Libya to direct "the resistance fighters".


The Times continued, "In London, Mrs. Clinton and other Western leaders made it clear that the NATO-led operation would end only with the removal of Colonel Qaddafi, even if that was not the stated goal of the United Nations resolution."


The war-like Democrats will lie down alongside their war-mongering Republican colleagues in the Congress and will watch this play out and offer no resistance. The Congress is just the puppet show, there to give the public the illusion that democracy still exists in this blood-stained land. But in fact the oligarchy had this whole plan mapped out long ago. All the places on this planet that harbor oil, natural gas, water, and other abundant mineral resources are on the hit list.


It is the job of the U.S. to lead this assault on the remaining global resources for the benefit of the corporations. America has been turned into a killing culture and it is our job, with the help of any willing allies, to take control of these resource rich lands. Killing people does not matter. Their lives rate below that of the oil or other treasurers.


Freedom, liberty, democracy are all part of the puppet show in order to humanize and legitimize these killing fields with the war weary public. Democrats like Obama help keep the peaceniks tamed and in their cages. Republican politicians keep their party faithful distracted by whipping up outlandish fears about the U.S. becoming "a secular atheist country" that is potentially dominated by "radical Islamists."


Few are then left to stand on street corners and protest these wars and call for our war $$ to be brought home. Others are either cowering in their homes or glued to the TV set watching the latest fireworks displays from Libya. All the while the soul of the American people shrivels up and we become accustomed to the killing and barbarity done in our name.


It's a roller-coaster ride for all of us as the biblical injunction "Thou shall not kill" flickers now and then in our consciousness, trying to stay alight against the winds of madness and war.

Related Topic(s): ATHEIST; Afghanistan; Congress; Consciousness; Culture Of Corruption; Culture Of Deception; Culture War -s-; Democracy; NATO; Oil; (more...) Oligarchy; Pentagon; Republican; Resistance, Add Tags  (less...)
Add to My Group(s)
Go To Commenting
The views expressed herein are the sole responsibility of the author and do not necessarily reflect those of this website or its editors.