"You see in this world there's two kinds of people, my friend. Those with loaded guns, and those who dig. You dig." -  Blondie -- The Good, the Bad and the Ugly

"There are two kinds of people in the world, my friend. Those who have a rope around their neck and those who have the job of doing the cutting." -- Tuco -- The Good, the Bad and the Ugly

The economic peril that we find ourselves confronted with, has been ninety-eight years in the making. The confluence of debt, demographics, delusion, and denial has left the country at the precipice of annihilation. There are two kinds of people in the world, those who control the money and those that are controlled by those who control the money. The last century has been marked by a methodical looting of the good (working middle class) by the bad (Federal Reserve & bankers) and supported by the ugly (Washington D.C. politicians). When historians pinpoint the year in which the Great American Empire began its downward spiral they will conclude that year to be 1913. In this dark year for the Republic, slimy politicians, at the behest of the biggest bankers in the country, created a private central bank that has since controlled the currency of the United States. This same Congress staked their claim as the most damaging group of politicians in US history by passing the personal income tax in the same year. These two acts unleashed the two headed monster of inflation and taxation on the American people.

The government began keeping official track of inflation in 1913, the year the Federal Reserve was created. The CPI on January 1, 1914 was 10.0. The CPI on January 1, 2011 was 220.2. This means that a man's suit that cost $10 in 1913 would cost $220 today, a 2,172% increase in ninety-eight years. This is a 95.6% loss in purchasing power of the dollar.  The average American does not understand the insidious nature of central bank created inflation. It makes you think you are wealthier while you are driven into abject poverty. The Federal Reserve and politicians have pulled the wool over your eyes. The CPI was 30.9 in 1964. Today, it is 223.5. This means prices have risen 723% since 1964. The only problem is your wages have not risen at the same rate, even using the government manipulated CPI. Using a true CPI figure, average weekly earnings are 64% below what they were in 1964. This explains why a family of five could live well with one parent working in 1964, but even with both parents working and accumulating debt in prodigious amounts, the average family cannot live as well today. 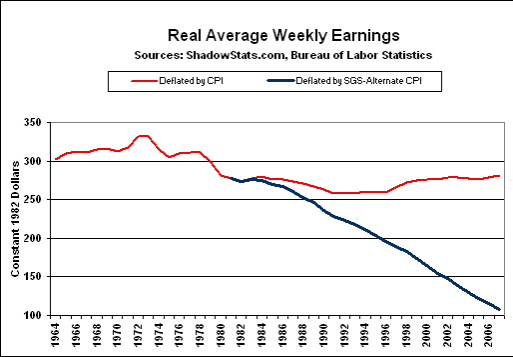 It is not a coincidence that the percentage of the working age population employed bottomed in 1964 at 59%. The participation rate rose steadily for the next thirty six years, topping out in 2000 at 67.1%. The employment to population ratio also bottomed at 55% in 1964. It rose to 64.4% by 2000. It seems that future historians will mark the year 2000 as the peak of the American Empire. Apologists for the Federal Reserve and politicians who have steered this country since 1964 would argue the increase in the percentage of the population working was a positive development. Nothing could be further from the truth.

The American middle class was forced to send both parents into the workforce just to keep up with the ever declining real weekly earnings. The Federal Reserve created inflation has methodically destroyed the American dream for the middle class. As both parents had to go into the workforce, American children were left to fend for themselves or be raised by strangers in daycare centers. The pressure of trying to keep up with inflation strained families to the breaking point. The number of divorces per thousand marriages was 10 in the early 1960s. It more than doubled to 22.6 by 1980 and still resides at 17 today. There are many factors for the disintegration of the traditional family unit, but the financial strain on families to maintain a consistent standard of living due to relentless inflation has been a key factor.

From the founding of our country there had been constant conflict between corrupt bankers trying to control the currency of the nation to further their own enrichment at the expense of the people and a few courageous leaders willing to fight them. The bankers won the century old battle in 1913.

"I too have been a close observer of the doings of the Bank of the United States. I have had men watching you for a long time, and am convinced that you have used the funds of the bank to speculate in the breadstuffs of the country. When you won, you divided the profits amongst you, and when you lost, you charged it to the Bank"You are a den of vipers and thieves. I have determined to rout you out and, by the Eternal, I will rout you out." - Andrew Jackson

The First Bank of the United States was created in 1791. Alexander Hamilton, the 1st Secretary of the Treasury, proposed this bank and convinced a hesitant President Washington to agree. John Adams and Thomas Jefferson were against the concept. It favored the moneyed classes of the North versus the agrarian South. The bank was given a 20 year charter and President James Madison let it expire in 1811. He understood the true nature of the banking interests:

"History records that the money changers have used every form of abuse, intrigue, deceit, and violent means possible to maintain their control over governments by controlling money and its issuance".

Madison had to renew the charter in 1816 as the War of 1812 resulted in large government debts. Politicians always turn to bankers when funding wars and programs to get them re-elected. As usual, once unshackled, the bankers immediately caused a boom through their loose monetary policies. The Bank created a fake boom by 1818 through its reckless lending, which encouraged speculation in land. This lending allowed almost anyone to borrow money and speculate in land, sometimes doubling or even tripling the prices of land (remind you of another time in recent history?). In the summer of 1818, the national bank managers realized the bank's massive over-extension, and instituted a policy of contraction and the calling in of loans. This recalling of loans simultaneously curtailed land sales and slowed the U.S. production boom due to the recovery of Europe. The result was the Panic of 1819. There was a wave of bankruptcies, bank failures, and bank runs; prices dropped and wide-scale urban unemployment struck the country. By 1819 many Americans did not have enough money to pay off their property loans. Do you see any difference between 1816 -- 1819 and 2005 -- 2011? Central banks don't eliminate financial panics, they cause them. Booms and busts have always existed. They have become more common and extreme since the unleashing of greedy corrupt central bankers in the U.S., going back two centuries.

Andrew "Old Hickory" Jackson became President in 1829 and proceeded to declare war on the Second National Bank. He was the first and only President in U.S. history to pay off the National Debt. He worked tirelessly to rescind the charter of the Second Bank of the United States. His reasons for abolishing the bank were:

James Quinn is a senior director of strategic planning for a major university. James has held financial positions with a retailer, homebuilder and university in his 22-year career. Those positions included treasurer, controller, and head of (more...)
Related Topic(s): Bankers; Banks; Cabal; Credit; Depression; Economic; Inflation; Money; Money, Add Tags
Add to My Group(s)
Go To Commenting
The views expressed herein are the sole responsibility of the author and do not necessarily reflect those of this website or its editors.