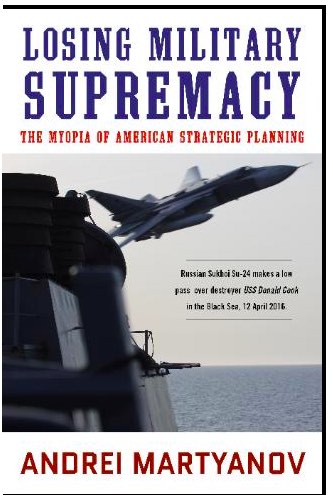 When I first heard of Andrei Martyanov, I was skeptical about his intentions. Born in Baku, Azerbaijan, USSR, 1963, he became a naval officer and expert on Russian military and naval issues. He took part in conflicts in the Caucasus. In mid-1990s, he moved to the US for reasons unstated in print. He currently works as laboratory director of a commercial aerospace group, and blogs on the US Naval Institute Blog and one on the other side of the fence, unz.com.

This is not a typical leftist or peace activist, but after reading his book and a piece on the website of the world's most aggressive naval institution, I surmise that this Russian-American seeks to influence the avaricious eagle into realizing that warring against the cautious bear would not achieve success for anyone. Here is his conclusion of that blog piece:

"Today, the Russian Navy is on its way to becoming a leaner and more potent"version of its former Soviet self, capable of carrying out any task in defense of its country. By doing so, the Russian Navy has finally found its mission. Considering Russia's immense and tragic experience with warfare, such an accomplishment is no small feat. Especially in the absence of a coherent navy specific doctrine." https://blog.usni.org/posts/2017/06/01/russian-navy-mission-found

This statement is in keeping with what Martyanov sees as his book's key mission: to assist his native country in defending its national sovereignty, which entails acting to prevent a nuclear world war. As he states in the conclusion of his book, Losing Military Supremacy, he is most worried that it is the United States that will pull the trigger to set off world war III.

"The main task today is to prevent by all means any possibility of this delusional, self-proclaimed exceptional nation unleashing Armageddon because of frustration with its own weakness"" so well exposed by now.

Martyanov refers to the fact that despite all the hubris, the US has failed to win most of the wars it has started since WWII. Korea was a stalemate. It lost to Vietnam/Cambodia/Laos. Afghanistan will never be conquered. The victory over a much inferior Iraqi military largely destroyed the cradle of civilization and left nearly all its people hating the US. The current government wants the US out of its country and is allied with Iran, a country the US government sees as an enemy. The US got rid of Libya's leader Muamar Gaddafi only to have him replaced by three internally fighting self-declared governments, whose extremist Muslims wantonly murder, smuggle and enslave people. The once richest people in Africa are now among the poorest. The US has divided people in Syria, and also in Ukraine where they installed a neo-fascist following a US-orchestrated and funded coup government.

Related Topic(s): Book Reviews; Military Defeat; Nuclear Armegedan; Nuclear Arms Race; Russia And Us Conflict; War With Russia, Add Tags
Add to My Group(s)
Go To Commenting
The views expressed herein are the sole responsibility of the author and do not necessarily reflect those of this website or its editors.