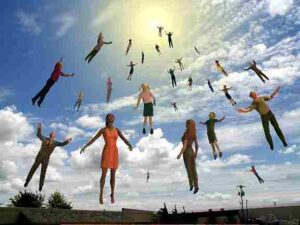 T-minus six days and counting until the BIG DAY! Are you Rapture-Ready, Truthseekers?  Well, maybe not you, but are your loved ones and close friends who have been Washed In The Blood Of The Lamb ready to meet their personal Savior? More to the point, will they leave you their wii and new ipod when they ascend to the heavens on that great gettin' up morning?


According to Harold Camping, the 89-year-old founder of  Family Radio, the Rapture (really, this is the one, no kidding!) is scheduled for this Saturday May 21st at 6PM. That's 6PM wherever you are in the world, mind you. This is going to be a rolling time-zone Rapture. Kinda like a massive, global stadium wave, but with floods and earthquakes and burning bodies and the rain of hellfire and brimstone and such. So, if you're in time zone #1, you might want to Tweet your buds in future time zones to party like it's 1999. Or rather, May 20th, 2011. Something like that.

Harold is 89. Hmmm . . . ever wonder if he's just a wee bit afraid of the dark, as in the everlasting nothingness, and maybe wants to believe that if he's not long for this universe, then nobody else is, either? Some folks just need to go out with a bang. A big bang.

Harold has spent years searching the Holy Book to ascertain the exact date of Judgment Day, and he's confident about this date. Unlike in 1992, when he predicted the world would end in 1994. Naw, this time he's double-checked his math! Harold reaffirmed his certainty in this recent interview with New York magazine, asserting that:

"God has given sooo much information in the Bible about this, and so many proofs, and so many signs, that we know it is absolutely going to happen without any question at all. There's nothing in the Bible that God has ever prophesied -- there's many things that he prophesied would happen and they always have happened -- but there's nothing in the Bible that holds a candle to the amount of information to this tremendous truth of the end of the world . . . I know reporters don't like to hear from the Bible, but the Bible has every word in the original language -- it was written by God. Incidentally, no churches believe that at all, they don't hold the Bible in the high respect that it ought to be. But every word was written right from the lips of God. ... It. Is. Going. To. Happen. Because I trust the Bible implicitly, the Bible is God's word -- it's not from a man, it's not from an organization of some kind where there's plenty of room for error. It is the word of God."

Well, the billboards are up so this must be The Big One! You know things are getting serious when the ad buys begin. Some of his followers have already burned through their savings (why not?) and are divesting themselves of all their worldly possessions in preparation. Might be a GREAT time to check Craig's List for upcoming yard sales. ... I pity the otherwise Godly hoarders who cannot bear to have others touch their things. Sheesh, what a nightmare this must be for those poor saved souls. But I digress.

If this event does, indeed, transpire on Saturday, important questions demand answers. What happens to Fido? Is there a way for your German Shepherd to accept Christ as his personal savior, too? Or are our pets cast into the fiery pits of eternal damnation along with the rest of us Godless Heathens?

What about the tiny newborns who have not had time to develop the necessary brain cells to make the informed choice to open their little hearts to Jesus? Doomed as well? What about all those episodes of Mad Men you TiVo'd to watch later -- down the tubes? That little black dress you bought to wear to that fun summer party?