Eva Bartlett visited refugees in Syria escaping the horrid conditions in the Rukban Refugee Camp, a desolate outpost in the US administered deconfliction zone. What she found was very different than the 'reality' depicted by the Western press.

AD-DUMAYR, SYRIA A little over a year ago just after the Syrian army and its allies liberated the towns and villages around eastern Ghouta from the myriad armed jihadist groups that had waged a brutal campaign of torture and executions in the area I interviewed a number the civilians that had endured life under jihadist rule in Douma, Kafr Batna and the Horjilleh Center for Displaced People just south of Damascus.

A common theme emerged from the testimonies of those civilians: starvation as a result of jihadist control over aid and food supplies, and the public execution of civilians.

Their testimonies echoed those of civilians in other areas of Syria formerly occupied by armed anti-government groups, from Madaya and al-Waer to eastern Aleppo and elsewhere.

Despite those testimonies and the reality on the ground, Western politicians and media alike have placed the blame for the starvation and suffering of Syrian civilians squarely on the shoulders of Russia and Syria, ignoring the culpability of terrorist groups.

In reality, terrorist groups operating within areas of Syria that they occupy have had full control over food and aid, and ample documentation shows that they have hoarded food and medicines for themselves. Even under better circumstances, terrorist groups charged hungry civilians grotesquely inflated prices for basic foods, sometimes demanding up to 8,000 Syrian pounds (US $16) for a kilogram of salt, and 3,000 pounds (US $6) for a bag of bread.

Given the Western press' obsessive coverage of the starvation and lack of medical care endured by Syrian civilians, its silence has been deafening in the case of Rukban a desolate refugee camp in Syria's southeast where conditions are appalling to such an extent that civilians have been dying as a result. Coverage has been scant of the successful evacuations of nearly 15,000 of the 40,000 to 60,000 now-former residents of Rukban (numbers vary according to source) to safe havens where they are provided food, shelter and medical care.

Silence about the civilian evacuations from Rukban is likely a result of the fact that those doing the rescuing are the governments of Syria and Russia and the fact that they have been doing so in the face of increasing levels of opposition from the U.S. government.

Rukban lies on Syria's desolate desert border with Jordan, surrounded by a 55-km deconfliction zone, unilaterally established and enforced by the United States, and little else aside from the American base at al-Tanf, only 25 km away a base whose presence is illegal under international law. 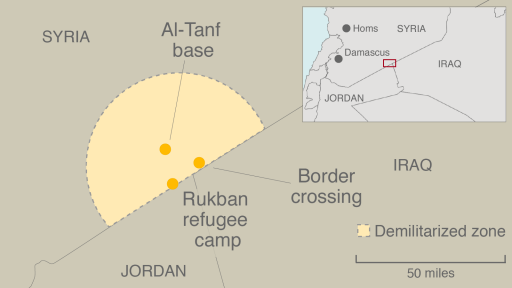 It is, by all reports, an unbearably harsh environment year-round and residents of the camp have endured abuse by terrorist groups and merchants within the camp, deprived of the very basics of life for many years now.

In February, the UNHCR reported that young girls and women in Rukban have been forced into marriage, some more than once. Their briefing noted:

Many women are terrified to leave their mud homes or tents and to be outside, as there are serious risks of sexual abuse and harassment. Our staff met mothers who keep their daughters indoors, as they are too afraid to let them go to improvised schools."

The Jordanian government, home to 664,330 registered Syrian refugees, has adamantly refused any responsibility in providing humanitarian assistance to Rukban, arguing that it is a Syrian issue and that keeping its border with Syria closed is a matter of Jordan's security, this after a number of terrorist attacks on the border near Rukban, some of which were attributed to ISIS and one that killed six Jordanian soldiers.