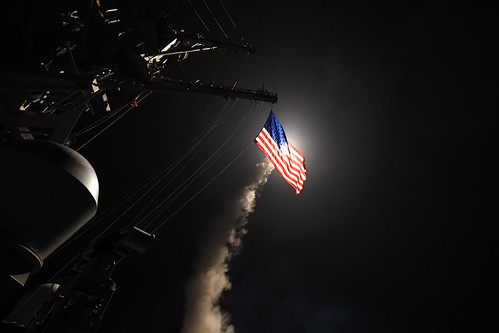 Let's see, US Deep State actors from intelligence agencies, the Pentagon, and the Department of State, along with US allies, played a MAJOR role in creating, funding, supplying, and sustaining ISIS, while purportedly doing everything possible to destroy ISIS. No problem. Why should there be a problem?" (The Underground, Jon Rappoport)

Trump and the Pentagon claim the strikes were based on clear evidence President Assad's forces used chemical weapons on their own civilian citizens.

The Russians point out that international inspectors were due to investigate the chemical-weapons claims on Saturday--and their findings would have denied Assad chemical attacks took place--therefore, to prevent this embarrassment, the US-led missile attacks were launched one day earlier.

MEMORANDUM FOR: The President
FROM: Veteran Intelligence Professionals for Sanity
SUBJECT: Evidence Required for Military Decision on Syria

"We the undersigned Veteran Intelligence Professionals for Sanity join a number of other credible experts including former UK Ambassador to Syria, Peter Ford...former UN weapons inspectors and former military officers who are strongly recommending that you obtain and review actual evidence from the site of the alleged chemical attack in Douma, Syria, before ordering any military action. We have long brought to light significant evidence questioning the provenance of chemical weapons indicating that rebel forces may have tried to produce and use such toxic agents in Syria.

"The main question that arises is, 'What motive would the Syrian government have to attack its own people when it is enjoying popular support for routing anti-government rebels? Why would it risk Western ire?'"...

Attacks and wars initiated by governments aren't prefaced by detailed evidence made available to the people. Presenting the whole story isn't necessary, as far as governments are concerned.

The last time "evidence" was rolled out -- "Saddam was developing WMDs, bought uranium from Niger, bought aluminum tubes for nuke weapons production" -- the whole show devolved into a farce and fell apart.

Many Trump supporters aren't buying the package. They believed Trump when he said the US was going to abandon empire-building and leave foreign nations alone and let them settle their own conflicts.

Now, a number of theories abound. Trump was duped by the military-industrial complex. Trump was never serious about refraining from launching military attacks. Trump is compromising now, but he has a further secret strategy in mind, a brilliant strategy against the Deep State. Trump is bowing to the Globalists, who want to continue destabilizing the Middle East. Trump is actually carrying out an Israeli (and/or Saudi) agenda. Attacking Syria is part of a US, British, and French plan involving access to oil in the region. Trump is pretending to step up his opposition to Russia (Assad's ally), to prove he isn't soft on Russia, to deflate the ferocious assault on him vis-a-vis the "Russia influenced the election" claim, to deflect Robert Mueller's ongoing investigation. Trump wants to improve his poll numbers, which always rise for any president in a time of war. Trump has no idea what he's doing. And so forth and so on.

There is no will, no determination, no desire, within the US government colossus, to be responsive to the wishes of the American people, when it comes to making war. There is no felt need to explain why war is necessary, in very specific terms that can be verified or rejected. There is no need to wait until evidence is thoroughly investigated.

Related Topic(s): Assad; Constitutional Crisis; Evidence; Genocide; Missile Strike; Neocons; Syria Attack, Add Tags
Add to My Group(s)
Go To Commenting
The views expressed herein are the sole responsibility of the author and do not necessarily reflect those of this website or its editors.