After seeing a pathetic propaganda piece on life in Syria during Covid, shared by a Beirut-based representative for the Canadian regime"I decided to both address the shoddy article and add my own thoughts on life in Syria nowadays.

Basically, the piece claims people are cowering in fear and under lockdown here (we/they are not, there's a partial curfew, people still on the street, in markets, etc), claims the government denies any cases of Covid (not true), claims:

"Now, this silence alone roams Damascus' streets and alleys, interrupted only by the sounds of marching soldiers, armed to the teeth as though for a firefight with the virus."

That's one of the more laughable/infuriating lines in his laughable propaganda piece.

Soldiers are *always* in the streets (but not "marching", idiot) because Syria has been under a foreign war for nearly a decade, because terrorists love to suicide bomb themselves and murder swaths of civilians while doing so (see: The confessions of terrorists: We detonated cars in Damascus and its countryside for money).

That said, in all of my encounters with soldiers in Damascus (and elsewhere), the are *not* intimidating, usually quite friendly, often joke with me, and otherwise professional. And carrying a rifle isn't exactly "armed to the teeth". For example, this photo:

Armed to the teeth would be this: Israeli soldier terrorizing Palestinian child. 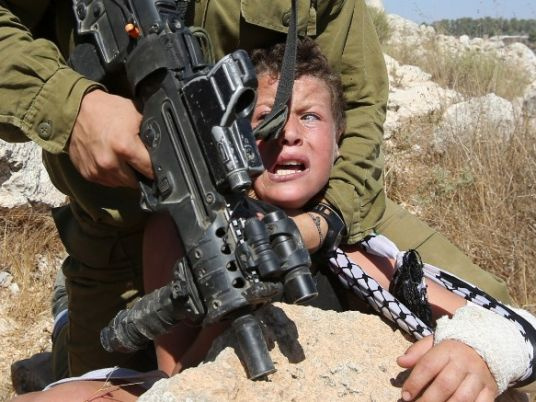 Armed to the teeth would be this: Israeli soldier terrorizing Palestinian child.
(Image by Eva Bartlett)   Details   DMCA

And this: US occupation soldier.

The author is clearly a propagandist (looking at his other articles) and wants to paint a dystopian image of life in Damascus and Syria now. The irony, of course, is his idiotic line actually pertains to countries in the west: replace soldiers with police"

Another distorted line: "Fear of the pandemic prompted Bashar al-Assad to issue a general amnesty for crimes committed before 22 March of this year.."

Actually, President Assad has issued countless amnesties over the years (see here ), in an effort to get armed men without blood on their hands to lay down weapons (also criminals wanted for crimes not involving murder, as well as military deserters) and re-join society.

Also see my 2014 interview with Dr. Ali Haidar, Minister of Reconciliation (who I also interviewed anew a month ago, waiting for transcript of that interview).

Related Topic(s): Syria; Syria Attack, Add Tags
Add to My Group(s)
Go To Commenting
The views expressed herein are the sole responsibility of the author and do not necessarily reflect those of this website or its editors.