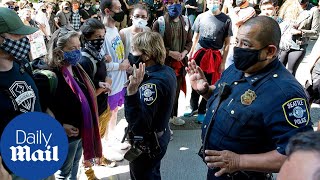 The marriage of post-Lock-down and George Floyd protests has nurtured a rough beast that is still immune to any form of civilized debate in the U.S.: the Seattle Commune.

Are the communards mere useful idiots? Is this a refined Occupy Wall Street experiment? Could it survive, logistically, and be replicated in NYC, L.A. and D.C.?

An outraged President Trump has described it as a plot by "domestic terrorists" in a city "run by radical left Democrats." He called for "LAW & ORDER" (in caps, according to his Tweetology).

Shades of Syria in Seattle are visibly discernable. Under this scenario, the Commune is a remixed Idlib fighting "regime counter-insurgency outposts" (in communard terminology).

For most American Right factions, Antifa equals ISIS. George Floyd is regarded not only as a "communist Antifa martyr," as an intel operative told me, but a mere "criminal and drug dealer."

So when will "regime forces" strike -- in this case without Russian air cover? After all, as dictated by Secretary Esper, it's up to the Pentagon to "dominate the battlefield."

It's enlightening to observe that "counter-insurgency" can be applied in Afghanistan and the tribal areas; to occupy Iraq; to protect the looting of oil/gas in eastern Syria. But not at home. Even if 58% of Americans would actually support it: for many among them, the Commune may be as bad if not worse than looting.

But then there are those firmly opposed. Among them: the "Butcher of Fallujah" Mad Dog Mattis; color revolution practitioners NED; Nike; JP Morgan; the whole Democratic Party establishment; and virtually the whole U.S. Army establishment.

Welcome to the Only Occupy Others movement.

Related Topic(s): Antifa; Black Lives Matter; FBI; Occupy Seattle; Pentagon; Racism; Syria; Syria Revolution, Add Tags
Add to My Group(s)
Go To Commenting
The views expressed herein are the sole responsibility of the author and do not necessarily reflect those of this website or its editors.