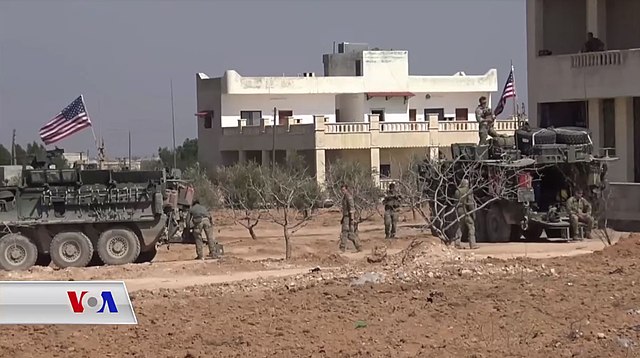 Ever since US president Donald Trump announced his intent to withdraw US troops from Syria in December, "hawks" in Congress have been looking for an argument against the withdrawal.

And this is the best they can come up with? If the troops don't stay in Syria, they can't keep getting killed in Syria? Wow, that really shows Trump, doesn't it?

At issue: The single deadliest Islamic State attack on US forces in their nearly four-year US invasion and occupation of Syria, on January 16 in Manbij, in which four Americans (two members of the armed forces, a contractor, and a civilian Pentagon employee) died.

When former president Barack Obama authorized the invasion and occupation of Syria in 2015, he did so in complete defiance of both US and international law. Congress had not then declared war on Syria and has not since then offered any formal legal basis for the Obama's actions. And since Syria is a United Nations member state which has never attacked the US nor indicated any intent to do so, the invasion/occupation constitutes a war of aggression "the supreme international crime," as Nuremberg Tribunal judge Norman Birkett called it.

Despite the complete absence of any compelling military or political reason for invading and occupying Syria, and despite the complete illegality of that invasion and occupation, these Senators believe that Trump should reverse his decision and keep US troops at risk in a land whether they're neither needed nor welcome.

After all, if US troops aren't there, US troops can't be killed there, and US troops need to be killed there every once in a while to justify keeping them there in perpetuity. The Senators' campaign donors in the "defense" industry need them kept there. Government contracts and stock dividends depend on it!

Related Topic(s): War Casualties, Add Tags
Add to My Group(s)
Go To Commenting
The views expressed herein are the sole responsibility of the author and do not necessarily reflect those of this website or its editors.