My Own Story Re: HUD, Housing and Compassion 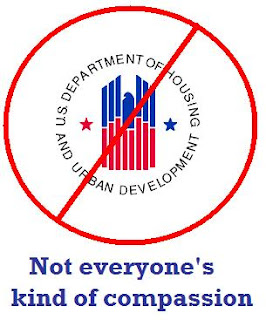 Who'd have thought that little Sweetwater, TN could garner such an august following! The Sweetwater Housing Authority may have started a revolution amongst faith-based agencies in regards to housing discrimination and sexual orientation. Below is part of the letter to HUD by the U.S. Conference of Catholic Bishops:

" ... the proposed addition of these new classifications ("sexual orientation" and "gender identity") in HUD regulations may, perhaps unintentionally, cause a type of discrimination not contemplated in the proposed rule.  Specifically, the regulations may force faith-based and other organizations, as a condition of participating in HUD programs and in contravention of their religious beliefs, to facilitate shared housing arrangements between persons who are not joined in the legal union of one man and one woman."

I'll admit that I have a somewhat personal stake in all of this, so please bear with me and keep in mind that there is a point to this anecdote:

In 1999, while not exactly "riding high" on life, my situation was good: I had married a wonderful man named Michael (the ceremony and reception composed one of the biggest gay weddings you've ever seen), we lived in a loft in San Francisco that I was able to remake into a "Victorian," I hosted a syndicated radio program interviewing authors and celebrities (e.g. Steve Allen and William F. Buckley) while promoting books and publishing them as well. In the meantime, Michael produced and directed plays (twelve years later - next week, in fact - he will be receiving the Bay Area Critics Circle Gene Price Award for his contribution to theater). We had a black "diva kitty" named Beauregard Jackson Pickett Burnside who preened for guests in his white rhinestone collar. Yes, life was more than good.

By 2002, however, the DotCom Bust had taken a toll on us: the loft went into foreclosure and we were thankful for the Housing Authority's Section 8. True, we were placed in the most dangerous section of San Francisco (pastime: reporting gunshots at night), but we knew we were lucky that the City of San Francisco and the State of California were more compassionate than other places in instituting their non-discrimination policies regarding sexual orientation. The 5 years we were in the Bay View district saw a deterioration in Michael's health (and mine, for a while) and our typically kind San Francisco neighbors helped us through my pneumocistus  and his three forms of cancer. We tried to give back to our community by helping the local kids  (I was honored with a Jefferson Award) and engineering outings to places like Great America.

Fast forward to the present: although not partners any longer, Michael and I live together in a Section 8 that is quiet and beautiful (necessary elements since he has been declared terminal with liver cancer) and I have been his IHSS caregiver for more than five years. He is now in his final stage of his cancer and doctors are stressing "comfort care."

Looking back to our situation in 2002, neither of us would have survived this long if we'd been in a place like Sweetwater, TN.* You know it. Nine years of care and support, love and compassion would never have existed. Places like Sweetwater demonstrate to us all that compassion has its limits when it comes up against certain tenets of "faith."

Now even the Catholic Church is setting limits on compassion. The letter to HUD proves it. When George Bush's Faith-Based Initiative passed, this is the kind of thing many of us knew would come to pass: "we're doling out dollars and charity on OUR terms, not yours!"

Sweetwater and Rome. God help us if this epidemic of righteousness becomes a pandemic of inhumanity.

* The Sweetwater Housing Authority Executive Director, Vicki Barnes, might take the advice of Abigail Van Buren (Dear Abbey) who, when asked by a homophobe what he could do to help improve the quality of his neighborhood after two gay men moved into it, she replied:
"You could move."

Rev. Dan Vojir is has been writing/blogging on religion and politics for the better part of ten years. A former radio talk show host (Strictly Books " Talk America Radio Network) and book publisher, Dan has connected with some of the most (more...)
Related Topic(s): Anti-gay; Catholicism; Compassion; Dept Of Housing And Urban Development; Gay Rights; Hate-Discrimination; LGBT; LGBTI Discrimination; Sweetwater, Add Tags
Add to My Group(s)
Go To Commenting
The views expressed herein are the sole responsibility of the author and do not necessarily reflect those of this website or its editors.