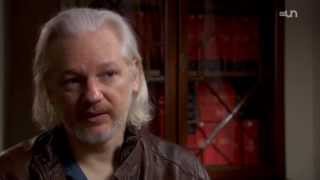 Assange is serving a 50-week sentence at Belmarsh prison in London for skipping bail in the rape case in 2012. Assange had lived inside the Ecuadorian embassy from June 2012 to April 11 this year, when Ecuador lifted his asylum and allowed British police to enter the embassy and arrest him.

On the same day the United States unveiled a sealed indictment accusing Assange of intrusion into a government computer. The U.S. also filed an extradition request for Assange.

Persson told a press conference in Stockholm on Monday that it would be up to British authorities to determine which extradition request -- to Sweden or to the U.S. -- would take precedence. She also said she wouldn't speculate on an extradition request from the U.S. to Sweden since one had not yet been made. The BBC reported that "the decision as to which of the two requests take precedence will be made by UK Home Secretary Sajid Javid. He would make his decision primarily on the basis of which alleged offence was considered to be more serious. Rape is likely to be considered more serious than conspiracy to commit computer intrusion. That would mean ordering Assange's extradition to Sweden."

Britain may take the opportunity to wash its hands of the politically thorny case of extraditing a publisher to the United States by sending him to Sweden instead, though Persson said Assange could not then be extradited to the U.S. from Sweden without Britain's consent.

Persson said her decision to reopen the case on "probable cause" was based on evidence, which she said was sufficient to suspect Assange of rape. Swedish authorities had twice dropped the investigation. The first time was just weeks after the allegations were made in August 2010. An arrest warrant was canceled on Aug. 21. Then Swedish chief prosecutor Eva Finne said that day: "I don't think there is reason to suspect that he has committed rape."

Assange left Sweden for Britain with Sweden's permission in September. When he arrived in Britain an international arrest warrant was issued for him on November 18, 2010.

Assange turned himself in on December 7 and was released on bail. He fought Sweden's extradition requests after Sweden refused to give his lawyers an assurance he would not be then extradited to the U.S. When his final appeal was lost, Assange asked for and received political asylum in Ecuador's London embassy.

Assange said he would welcome Swedish prosecutors coming to the embassy to question him, and prepared a written statement, but documents uncovered in a FOIA request by Italian journalist Stefania Maurizi showed heavy pressure from the British government on Sweden not to come to London. In 2017, Swedish prosecutors ultimately visited Assange at the embassy and in May of that year ended the investigation, which has now been revived. At the time the investigation was dropped for a second time, Katrin Axelsson and Lisa Longstaff of Women Against Rape wrote:

"The allegations against [Assange] are a smokescreen behind which a number of governments are trying to clamp down on WikiLeaks for having audaciously revealed to the public their secret planning of wars and occupations with their attendant rape, murder and destruction... The authorities care so little about violence against women that they manipulate rape allegations at will. [Assange] has made it clear he is available for questioning by the Swedish authorities, in Britain or via Skype. Why are they refusing this essential step in their investigation? What are they afraid of?"

The statute of limitations on the rape allegation runs out in August 2020.

Persson said the investigation would end after that if no charges are filed against Assange. The rape allegation was made by Anna Ardin, a Swedish national, who later admitted in a cryptic tweet that she was not raped. Last month, however, she tweeted:

"I would be very surprised & sad if Julian is handed over to the US. For me this was never about anything else than his misconduct against me/women and his refusal to take responsibility for this. Too bad my case could never be investigated properly, but it's already been closed."

Related Topic(s): Extradition; Investigation; Julian Assange Imprisonment; Rape; Wikileaks, Add Tags
Add to My Group(s)
Go To Commenting
The views expressed herein are the sole responsibility of the author and do not necessarily reflect those of this website or its editors.