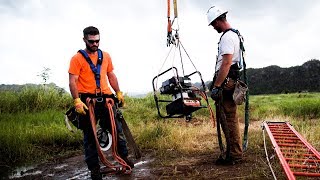 The swampish saga would be hard to invent. In early October, Puerto Rico's Energy Power Authority awarded a $300 million tax-funded contract to reconstruct the island's hurricane devastated power grid to a two-person, two-year-old firm based in the small Montana hometown of Trump Interior Secretary Ryan Zinke. The company is financially backed by a major donor to Donald Trump's 2016 presidential campaign.

About 80 percent of Puerto Rico is still without power. Many hospitals are still dark. Local citizens needing medical treatments such as surgeries or dialysis have been forced to flee to places where electric power is available.

Puerto Rico's power grid centers on antiquated oil, gas, and coal generators, the median age of which is 44 years. Just two percent Puerto Rico's juice came from wind and solar. One wind farm, on the south side of the island, survived Hurricane Maria largely intact, as did at least one small commercial solar array.

For Puerto Rico's 3.4 million residents, restoring power is a matter of life and death. But the $300 million dollar contract was handed, with no public hearings, legislative discussion or long-term planning, to Whitefish, an obscure company from rural Montana.

At least one Zinke relative -- his son -- has worked on part-time contract for Whitefish. Zinke claims he had nothing to do with the deal.

Anti-Trump sentiment is rampant throughout the island, fed by a lack of concern expressed by the President for Puerto Ricans' dire situation, and capped by a recent visit in which he pitched paper towels to a crowd of bewildered local residents. When San Juan mayor Carmen Yulin Cruz questioned the contract with Whitefish, the company threatened to stop work, then apologized.

The Puerto Rican power company's contract astoundingly exempted Whitefish from official audits, stating, "In no event shall (governmental bodies) have the right to audit or review the cost and profit elements." It also waived "any claim against Contractor related to delayed completion of the work," meaning Whitefish was empowered to pretty much take as long as it wanted to complete the job.

Whitefish wasted no time deploying a gold-plated battalion of high-priced contract workers into the island. Each was granted $1,000 travel expenses for each flight to and from the island. The workers' contracts called for $80/day in food expenses and $332/day for lodging. Wages were set at $240/hour for a foreman and $227/hour for linemen doing jobs for which prevailing U.S. wages are about $43/hour for supervisors and $23/hour for linemen. In other words, the deal reeked of Trump-era crony capitalism. When word spread, angry locals showered Whitefish workers with rocks and bottles.

But that was not the worst of it. Whitefish appeared to be rebuilding the wind-ravaged grid along exactly the same lines that existed prior to the storm. In other words, the company was reconstructing what was wiped away a month ago, and what would be virtually certain to be wiped away again by the next hurricane.

Since Maria, a lively public dialog has erupted over how to rebuild the island's power system with sustainable design. Tesla's Elon Musk sent in a shipment of Powerwall batteries designed to service solar-powered arrays. Tesla also installed a solar/battery/micro-grid array to make the Hospital del Nino entirely self-sufficient.

Musk has been in discussion with Puerto Rico's Governor Ricardo Rosselló about rebuilding the region along renewable lines, with windmills and photovoltaic panels powering a network of micro-grids that would give towns, neighborhoods and buildings a resilient safety net capable of weathering the inevitable next storm.

Multi-billionaire Richard Branson, whose private Necker Island was ravaged by recent storms, has also called for a "Green Marshall Plan" to rebuild the Caribbean with renewable energy. In a recent New York Timesop-ed, coauthored with green energy guru Amory Lovins, Branson wrote that by solarizing and decentralizing the region's grids, "we can stop blackouts caused by monster storms while also saving fossil fuel and reducing emissions of the greenhouse gases that warm the planet and make these storms more likely and destructive."

Since Hurricanes Harvey, Irma, and Maria roared through Texas, Florida, and the Caribbean, smaller nonprofits and activist organizations have also been focused on the vision of a totally green-powered master plan.

On Sunday, October 29, amidst a firestorm of local and Congressional inquiries, The New York Times reported that Governor Rossello had canceled the Whitefish contract. The company claims to have already spent millions. The court cases will undoubtedly churn up numerous storms of their own.

Related Topic(s): Cancellation; Contracts; Cronyism; Electrical Power; Trump In Puerto Rico, Add Tags
Add to My Group(s)
Go To Commenting
The views expressed herein are the sole responsibility of the author and do not necessarily reflect those of this website or its editors.