This article cross-posted from Daily Kos 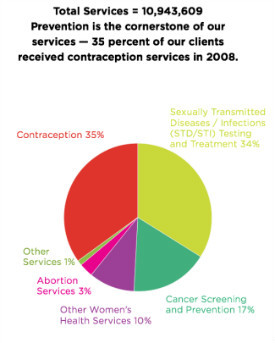 "The nation's leading breast-cancer charity, Susan G. Komen for the Cure, is halting its partnerships with Planned Parenthood affiliates -- creating a bitter rift, linked to the abortion debate, between two iconic organizations that have assisted millions of women.

"The change will mean a cutoff of hundreds of thousands of dollars in grants, mainly for breast exams."

Of course, that's not what they're saying:

"Komen says the key reason is that Planned Parenthood is under investigation in Congress -- a probe launched by a conservative Republican who was urged to act by anti-abortion groups."

Right. Because of extremists in the House, like Rep. Cliff Stearns (R-FL) and Michele Bachmann (R-MN), who tried last year to investigate and defund Planned Parenthood -- and even threatened to shut down the government if they didn't get their way -- low-income women will have a much harder time getting the necessary care they need to screen for and prevent cancer. And the Komen Foundation is now doing their dirty work for them.

And the fact that Karen Handel, the foundation's senior vice president of public policy, is "staunchly and unequivocally pro-life" is just a coincidence, right?

Send an email to the Susan G. Komen foundation and tell them what you think of this decision.

Planned Parenthood's statement is below....

"We are alarmed and saddened that the Susan G. Komen for the Cure Foundation appears to have succumbed to political pressure. Our greatest desire is for Komen to reconsider this policy and recommit to the partnership on which so many women count," said Cecile Richards, president of Planned Parenthood Federation of America.

In the last few weeks, the Komen Foundation has begun notifying local Planned Parenthood programs that their breast cancer initiatives will not be eligible for new grants (beyond existing agreements or plans). The Komen Foundation's leadership did not respond to Planned Parenthood requests to meet with the Komen Board of Directors about the decision.

"While this is deeply disturbing and disappointing, we want to assure women who rely on Planned Parenthood for breast care that we're still here for them, and we always will be. The new fund we're launching to support these services will ensure that the Komen Foundation's decision doesn't jeopardize women's health," added Richards.

Related Topic(s): Cancer; Funding; Health; Planned Parenthood Of America, Add Tags
Add to My Group(s)
Go To Commenting
The views expressed herein are the sole responsibility of the author and do not necessarily reflect those of this website or its editors.