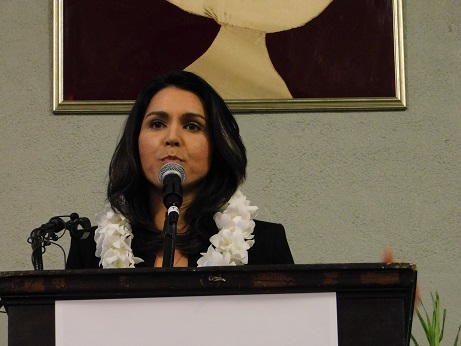 Hawaii Congresswoman Tulsi Gabbard, the anti-war candidate who has received very little attention from the media, dropped by Los Angeles on Saturday, March 30th , for a meet and greet. Almost all of the limited mainstream media attention has turned its coverage of the Presidential candidate into attacks of her opposition to war. Though she is a Major and has served on two tours in the Middle East, she has been called a Russian and other names for supporting peace and bringing the troops home. Little did the mainstream media know, but their attacks on her opposition to war have made her the dark horse candidate of 2020 who just might pull out a victory. 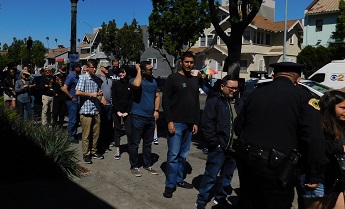 Expecting a much smaller crowd, her staff selected a venue that would do for just some ordinary Presidential candidate. The original venue would have even been large enough for the small crowds Hillary Clinton received in 2016. However, when the RSVPs came in, it became clear that the crowd would spill onto the streets, creating a traffic hazard on Fairfax. So, the venue was moved to the First Unitarian Church of Los Angeles, the sight of historic protests against the Vietnam and other wars and rallies for civil rights. It turned out that the new venue also underestimated the size of the crowd and hundreds were still in line as the room filled to capacity. The remaining crowd piled up outside the doors in the overflow area. 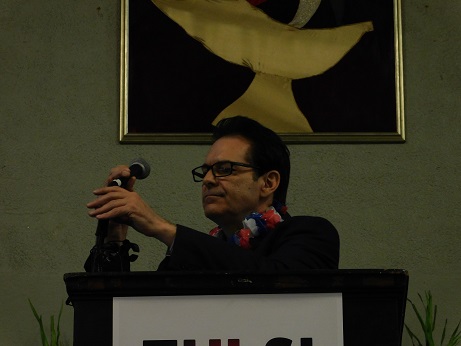 None other than Jimmy Dore was the Master of Ceremonies. Popular host of MCSC, Niko House endorsed Tulsi on the stage. Civil Rights activist Jay Ponti, who organized actions from occupying capitol buildings to protecting Native American water rights at Standing Rock, gave a passionate speech for the only 2020 Presidential candidate who had the courage to come to Standing Rock to stand with the water protectors. This is part of the reason for Tulsi's popularity. She doesn't back down when others tow the Establishment line. 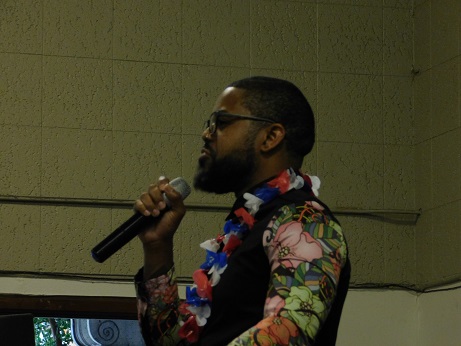 When asked why they were supporting her, attendees from the eager crowd listed off many reasons. This crowd was one of the most informed ones I've seen. These were the ten most common reasons for supporting Tulsi given by the crowd: 1) She is the only candidate who refuses to go along with the talking points for regime change. Other candidates say they oppose war while still echoing talking points for war. Tulsi feels the money could be better used at home than on regime change elsewhere. 2) Tulsi has refused to join the frenzied crowd who pushed Russiagate and who drove America closer to nuclear war than ever before. 2) She supports free college and Medicare for All. 3) She is the biggest threat to Wall Street and the private prison and military industrial complexes. 4) The Main Stream Media is terrified of her because of her courage to tell the truth. 5) She has worked with and supported some of America's greatest leaders, such as Dennis Kucinich. 6) She put her career on the line for Bernie Sanders, giving up her position as Vice Chairman of the DNC to back Bernie. She introduced him at the 2016 convention. 7) She has openly stated that she supports the rights of the Palestinian people. 8) Tulsi supported Ilhan Omar when the Establishment was attacking her. 9) She is a strong environmentalist. 10) She has addressed the real problems with the 2016 elections and has re-introduced her bill for paper ballots. 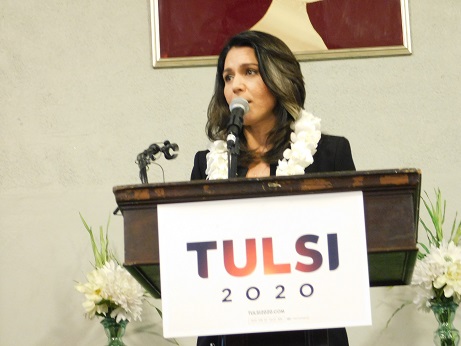 If Tulsi does win the nomination, she will be the first woman of color and the first person who is not from a Christian background to be nominated by the Democratic Party for the highest office. The first person to ask a question was a Sikh who tried to attack Hinduism and mischaracterize Tulsi's background. Rather than allow herself to be dragged into a discussion of the merits of one religion over another, she took the higher path to speak out for freedom of religion and respect for people of all faiths. The final question involved free college, which Tulsi supports. She expressed the importance of receiving a higher education.

At the event, the crowd was ecstatic and Tulsi received thousands of dollars in donations. Both Tulsi and Bernie supporters are continuing to encourage people to donate to Tulsi so she receives the 65,000 individual donations required by the DNC for participation in the debates. At the Bernie rally on March 23 rd and the Tulsi event on March 330th, both Los Angeles crowds saw Bernie and Tulsi as a team and probable running mates for 2020.

Henry has been a professor of political science and legal ethics and an advisor to many successful candidates for public office. He is currently working on a book about the inequality crisis in America.
Related Topic(s): Gabbard-Tulsi; Jimmy Dore; Medicare For All; Niko House; Peace_War; Prison Industrial Complex; Regime Change; Standing Rock Defenders; Standing Rock Water Defenders, Add Tags
Add to My Group(s)
Go To Commenting
The views expressed herein are the sole responsibility of the author and do not necessarily reflect those of this website or its editors.