When people think of a president, there are many qualities that, a long time ago, most folks would assume any president would always possess. Character, intellect, a natural charm. Barring a handful, the aforementioned traits generally could be found amongst most presidents in abundance.

One thing, though, is sub consciously most americans seem to expect that their president have a thick enough head of hair to be considered presidential.

Laugh, but it's true.

Going back a half century, ever since television, U.S presidents all have had a full head of hair; at least up front (with Johnson and Ford beginning to shed late in their presidency). Apparently, Americans instinctively prefer a president with an impressive mane.

But what if in addition to lacking the many qualities one would assume prerequisite in a president" what if Donald Trump has also gotten away with misrepresenting his mane?

Aside from images that occasionally give away the open secret, there supposedly is testimony from sources incredibly close to Donald, spilling the beans on his hair routine.

In Author Michael Wolff's book Fire and Fury: Inside the Trump White House, Wolff wrote Trump's hair is the result of scalp reduction surgery and careful styling held in place by strong hairspray.

Wolff claimed Trump's daughter, Ivanka, often mocks her dad's mop when she is speaking to friends.

"She often described the mechanics behind it to friends: an absolutely clean pate a contained island after scalp-reduction surgery surrounded by a furry circle of hair around the sides and front, from which all ends are drawn up to meet in the centre and then swept back and secured by a stiffening spray."

Such revelation" could it be the sign of a daughter's love?

Another source that's divulged the secret of Donald's hair is Dr. Harold Bornstein, who treated the property tycoon for 36 years.

When Donald was running in 2016, Bornstein revealed his famous patient takes a small dose of finasteride every day.

The New York-based doctor said that he also takes the drug as well to maintain his flowing shoulder length hair.

Bornstein was also, by the way, the son of the Doctor who gave a teenaged Donald a medical diagnosis of bone spurs around Vietnam.

Another source behind Trump's hair secret is his barber of twenty years, Adrian Wood. When asked to describe the process of coifing the Donald's hair during an interview, Wood stated, 'He's very specific. He'll say 'Cut here. Cut here. Cut here'. And then you would start trimming and he would say, 'Oh, that's enough there.'

Asked to be more specific about the bald spot, Wood stated, 'In order to cover that up, you really have to know what you're doing.' A photo of the Donald from the first season of the Apprentice still hung on Wood's wall.

As extra, here is the video of Wood discussing the management of Trump's scalp. 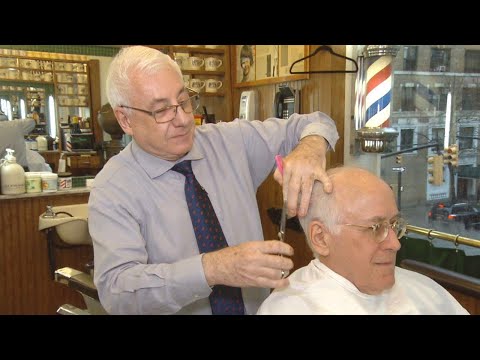 President Trump's Former Barber on What It Was Like to Cut His Hair Adrian Wood cut President Trump's hair for more than 20 years, which has time and time again been the subject of headlines and fascination. After Trump's ...
(Image by YouTube, Channel: Inside Edition)   Details   DMCA

Now with the 2020 election having pretty much been concluded with a win for Joe Biden, a question remains. Who won the contest within the contest; ie, whos hair was more presidential? Now to be honest, on the face of it, Joe Biden would appear to have lost.

Up front, what Joe seems to have is a protrusion of strands it would appear he brushes forward to create the appearance of a line. And in the back, really, there isn't much at all either. So again, on the face of things, Trump would appear to have won.

Only, deep down inside, everyone knows he probably didn't. Maybe, you the reader, might be follicaly challenged yourself, or your spouse, father, child. Maybe, at a personal level, you're aware of the sting this challenge possesses. So you've given Donald a pass. The nation, in fact.

But the truth is, in the contest of Presidential manes, Donald Trump probably cheated, too.

[Update: it's recently come to the Author's attention that allegations have surfaced concerning Joe Biden and Hair plugs. Alas, the possibility exists both men have forfeited victory]

I am a writer, with a progressive bent
Related Topic(s): Biden Won; Election Law; Election Litigation; Election Reform Activism; Election Systems And Software; Elections; Elections And Campaigns; Elections_Campaigns, Add Tags
Add to My Group(s)
Go To Commenting
The views expressed herein are the sole responsibility of the author and do not necessarily reflect those of this website or its editors.