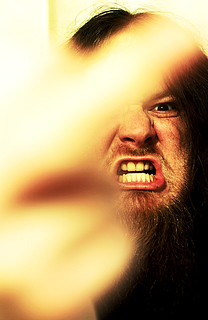 Okay, I'll admit it. I have often lost patience with long-time friends support Clinton. I have been impatient and said disrespectful things that I regret. I don't want to make excuses for my behavior, but in my defense I have to say that it is very frustrating that so few of them seem to be willing to take a look at why "Bernie bros" are so adamant in their support of Sanders. It seems obvious to us that we have an historic opportunity to decisively reject the assumption that a person can only be elected President if they are backed by powerful economic players. How could anyone choose Wall Street's golden girl over a champion of campaign finance reform and all the progressive battles we will never win until it is achieved? To paraphrase the unofficial motto of the first Clinton's campaign: "It's the corruption, stupid!

That's not meant to be personal, of course. It's just that the seemingly willful blindness of Clinton supporters is maddening to those of us who recognize the need for a real political revolution to end control of the political process by the narrow economic elite she represents. However, the idea that they are willing to stay with a candidate who has done nothing but abuse them and sweet talk them with broken promises should inspire pity, not wrath. Their passion for Clinton may be irrational, but isn't that the nature of love? It is not helpful to lash out at them for seeing the best in her, even when what they see is not there. That is, after all, a frequent feature of the battered spouse syndrome. Democrats who support Clinton show all the signs of this depressingly common condition.

We Sanders supporters are not helping our case by lashing out at the very people we should be trying to reach. We need to take a deep breath, remember that these are people we care about, and realize that self-destructive behaviors are common in people who have been abused. We may be surprised that they are not acting like the people we thought they were, but these are our friends! We have been through so much with them over the years that we cannot abandon them when they most need understanding. It is no doubt this emotional bond that makes us so angry when we see them debase themselves by asking for more abuse from the Democratic Party. We are only angry at them because we care.

Despite a long history of abusive relationships with past Democratic politicians, those who have fallen victim to Clinton's wiles fail to recognize that the party they have sworn not to forsake is not what they thought it was. Like victims of other forms of abuse, they seem to be attracted to those very characteristics which prevent a healthy relationship. While the dysfunctional nature of the relationship is obvious to those of us who can view the situation objectively, to the star-crossed hopefuls who desperately want to believe that they have found true love, the party can do no wrong. Every time they think they have found someone who understands them and who shares their interests, they find out too late (if ever) that they are understood all too well, and have fallen for another politician who will exploit their weakness for their own purposes.

Clinton supporters are often quite intelligent people. Knowing this, their friends have to wonder why they tolerate the abuse they have suffered from the Democratic Party without complaint. The answer isn't complicated. They are so blinded by the love for the one they are in bed with that they accept any excuse for her actions that allows them to cling to the fantasy that they are cared for. Confronted with bald faced lies, they would rather accept ridiculous excuses than face the truth that the person they have chosen has no respect for them. The fact that a number of these lies are over such trivial matters that they suggest a compulsion doesn't even seem to cause them concern.

Oh sure, such people can be nice. Not to accuse Clinton specifically, but let's admit it: Everyone knows that psychopaths can be the most charming people in the world. For instance, the fact that she makes a show of supporting the rights of women and children in public doesn't necessarily mean she is compassionate. If this were a deeply held value, would she not care as much for women and children in Iraq, Ukraine, Libya, Syrian or any nation targeted by her neocon friends? Her capacity for violence is well known, and at times she does not even bother to hide the pleasure it brings her. It doesn't cost her a thing to say nice things about people to get votes, but those who are taken in are not seeing the glaring inconsistencies in her behavior.

I don't want people to get the idea that I am exaggerating my concerns about my Clinton-loving friends for effect. For the most part, the abuse has been subtle but all the signs are there. Let's face it: If they haven't learned from the mistakes they have made in past relationships, they aren't going to see this one coming. They are likely to deny it when it gets worse, and the suffering she inflicts gets more serious. Just look at how many of them still moon over Bill, after all his transgressions. He wasn't just a liar and a cheater. He put our finances at risk with NAFTA and banking regulation, destroyed the party's already shaky reputation for favoring diplomacy over war by introducing "humanitarian intervention" in Kosovo, and did a lot of other disgraceful things that Clintonites have forgiven or forgotten, if they were ever acknowledged.

Although she now repudiates her support of her husband's crime bills, opposition to gay marriage, welfare "reforms" and claims to have never supported NAFTA, Hillary is on record as having promoted all of it. She is also opposed to reinstating an updated version of Glass-Steagall that Bill eliminated, obfuscating the issue by pretending that Sanders doesn't understand the role of the shadow finance industry. Doubling down on her claim to have opposed NAFTA from the beginning instead of only during the 2008 campaign, she now wants us to trust her claim that she opposes the TPP, which she played a key role in negotiating.

I am trying to be understanding, but like many Americans, I am dismayed at the fact that anyone who considers herself a progressive would choose a business-as-usual "pragmatist" like Clinton over someone with a long record of supporting real solutions to the problems threatening the US middle class. Anyone who looks at the record of past failed relationships with Democratic politicians objectively can see the problem is in falling in love with the false image they present to us, even when all the clues are there.

We don't have to "settle." We deserve better. Despite our past mistakes in choosing who to trust, we do not deserve to be treated this way. The only reason anyone accepts this is that they don't want to face the shame of being played for a fool. The truth is that most of us have been there at some point in our lives. We need to let those stuck in this mental prison know they are not alone. It is not being "realistic" to accept that they cannot do better. Now that we actually have a choice, we need to take it. Let's recognize that ever since Bill strayed off on the Third Way, Democrats have lost their sense of identity. They must find the will to deal with the endemic corruption of electoral politics that the Democratic establishment has embraced. At the risk of idealizing Sanders as "Mr. Right," the choice seems clear.

Related Topic(s): Clinton Bill; Clinton Campaign; Corruption; Glass-Steagall; OPPORTUNITY; Revolution; Spouse Abuse, Add Tags
Add to My Group(s)
Go To Commenting
The views expressed herein are the sole responsibility of the author and do not necessarily reflect those of this website or its editors.