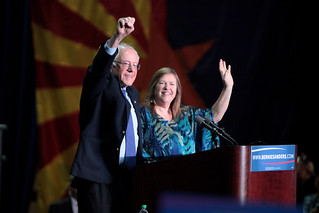 Bernie & Jane Sanders will be moving to the White House
(Image by Gage Skidmore)   Details   DMCA
Bernie is going to win the July convention. That's because polls already are and will even more dramatically show that Hillary will lose to Trump, but not just the White House. She will cost the Democrats a majority in the Senate, the Supreme Court and a stronger position in the House. Over the weeks before the Democratic convention, Hillary will slide to a worse and worse position. Her "win" in Kentucky is emblematic. In 2008 she defeated Obama by over 200,000 votes. She squeaked out a victory by 1800 votes last night. The slide will be in full bloom, like the reek of a cesspool, by convention time. The superdelegates will be faced with a decision-- go with Hillary, with many many polls showing a disaster about to unfold, or go with Bernie and win the Senate, take the Supreme court and make major headway in the House.
It's happening. Now that Donald Trump has the nomination he is shifting his image, softening and moderating it with the help of the best consultants in the world. Paul Manafort, who has made a career of re-framing tyrants into gentle heroes who the US gives millions or billions, is one of a team of PR geniuses who will succeed in re-framing Trump. That will drop his negatives to below the record high negatives Hillary has, and THAT, is already changing the polls. One recent Rasmussen poll has Trump defeating Hillary and another shows them in a statistical tie.
Hillary's slide is just starting. It will get worse, a lot worse. To foresee where she's heading look to polls of states, some swing, some usually red, comparing Clinton and Sanders running against Trump.
Here are recent national polls from RealClearPolitics (updated 5/20)

(Image by RealClearPolitics.com)   Details   DMCA
Quinnipiac shows Clinton losing to Trump in Ohio and statistically tying Trump in Florida and Pennsylvania. Bernie Sanders beats Trump by 2 in Ohio and Florida, and by six in Pennsylvania, compared to Hillary's one point lead.

(Image by RealClearPolitics.com)   Details   DMCA
In New Hampshire, Clinton squeaks by Trump, while Sanders trounces him, with a 16 or 21 point difference.
Clinton loses to Trump in Arizona, a red state. Sanders squeaks a win-- a five point difference from Hillary.
These differences are important, and they will grow. They really matter when it comes to Senate races.
In New Hampshire, the race between Ayotte and Hassan is very close. Can you image that Sanders sixteen or 21 point leads could make the difference, coat-tail-wise, in helping Democratic senate candidate Maggie Hassan pull ahead of incumbent Republican Kelly Ayotte?

(Image by RealClearPolitics.com)   Details   DMCA
In Florida, Ohio and Pennsylvania the Senate races are all very close. Sander's stronger pull among independents and the youth vote will absolutely make the difference in enabling Democratic challengers to Senate incumbents in PA and OH to win, and to help insure a win in the Florida race where candidates are competing to replace Marco Rubio.
But take a look at that Arizona poll. Sanders on the ballot could put the Arizona senate race into play. That would force Republicans to spend a lot more money in a traditionally red state. Then there's Georgia.

(Image by RealClearPolitics.com)   Details   DMCA
Here's another traditional red state that Bernie Sanders puts into serious play. Again, it will force the GOP to spend a lot more to try to hold on to Georgia.
Remember, Trump is just getting started going after Hillary. Her slide into defeat and being thrashed in the polls nationally and in key states is just getting started. It will get much worse as we get closer to the July convention in Philly. By the time the superdelegates arrive they will be faced with a difficult choice-- support Hillary and hand complete control of the nation-- White House, Senate, Supreme Court and the House-- over to Donald Trump and the GOP, or switch to supporting Bernie Sanders.
Bernie may not even have a lead in pledged delegates. But he'll have cut Hillary's lead enough so between the 150 not yet committed Superdelegates and the ones smart enough to see the writing on the wall who switch from Hillary, he will win the primary. Clinton and her Hillbots will scream bloody murder, but the stark reality-- that allowing her to become the candidate will doom the Democratic party-- will enable Bernie to win the convention and move forward into the general.
Update 5/17:

1) Several people have pointed out in the comments and otherwise that the DNC and superdelegates may be more interested in tending to where their bread is buttered-- their corporate leash-holders-- than in securing a winning candidate. They'll screw women and minorities and stay with Hillary.

2) Polls have been really off this election season, a Hillary supporter scoffs. That's true, but almost every poll that was off predicted that Hillary would do better than she actually did. That means that when a poll suggests that Hillary is up a few points over Trump, or even five or six, based on past performance of almost all the polls, she'll actually do far worse than that. This further supports my analysis.

"In May of 2008, Congresswoman Debbie Wasserman Schultz, who is currently the Chair of the Democratic National Committee, served as co-chair of Hillary Clinton's campaign against Barack Obama. Even though the campaign was down on delegates, Wasserman Schultz actually said superdelegates should side with Clinton anyway, since she was the stronger candidate come the general election."

'Senator Clinton won last night. She will win next Tuesday. She will win in Puerto Rico. And the case needs to be made to the superdelegates -- who, Governor, at the end of the day, that's who's going to decide this -- that Hillary Clinton is the strongest potential nominee in the fall, and that's what we're going to -- the case we're going to continue to make.'"

Related Topic(s): Bernie Sanders 2016 Presidential Candidate; Hillary Clinton, Add Tags
Add to My Group(s)
Go To Commenting
The views expressed herein are the sole responsibility of the author and do not necessarily reflect those of this website or its editors.