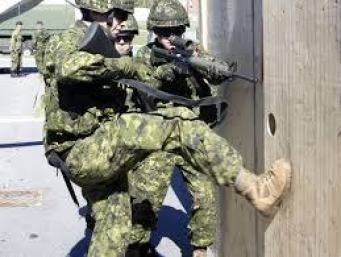 Most Canadians would be surprised to learn that the sun never sets on the military their taxes pay for.

This country is not formally at war yet more than 2,100 Canadian troops are sprinkled across the globe. According to the Armed Forces, these soldiers are involved in 28 international missions.

There are 850 Canadian troops in Iraq and its environs. Two hundred highly skilled special forces have provided training and combat support to Kurdish forces often accused of ethnic cleansing areas of Iraq they captured. A tactical helicopter detachment, intelligence officers and a combat hospital, as well as 200 Canadians at a base in Kuwait, support the special forces in Iraq.

A comparable number of troops are stationed on Russia's borders. About 600 Canadians are part of a Canadian-led NATO mission in Latvia while 200 troops are part of a training effort in the Ukraine. Seventy-five Canadian Air Force personnel are currently in Romania.

Some of the smaller operations are also highly political. Through Operation Proteus a dozen troops contribute to the Office of the United States Security Coordinator, which is supporting a security apparatus to protect the Palestinian Authority from popular disgust over its compliance in the face of ongoing Israeli settlement building.

Through Operation Foundation 15 troops are contributing to a US counter-terrorism effort in the Middle East, North Africa and Southwest Asia. As part of Operation Foundation General A. R. DAY, for instance, Directsthe Combined Aerospace Operations Center at the US military's Al Udeid base in Qatar.

The 2,100 number offered up by the military doesn't count the hundreds, maybe a thousand, naval personnel patrolling hotspots across the globe. Recently one or two Canadian naval vessels with about 200 personnel each has patrolled in East Asia. The ships are helping the US-led campaign to isolate North Korea and enforce UN sanctions. These Canadian vessels have also been involved in belligerent "freedom of navigation" exercises through international waters that Beijing claims in the South China Sea, Strait of Taiwan and East China Sea.

Nor does the 2,100 number count the colonels supported by sergeants and sometimes a second officer who are defence attache's based in 30 diplomatic posts around the world (with cross-accreditation to neighbouring countries). Another 150 Canadian military personnel are stationed at the North American Aerospace Defense Command headquarters in Colorado and a smaller number at NORAD's hub near Tampa Bay, Florida. These bases assist US airstrikes in a number of places.

Dozens of Canadian soldiers are also stationed at NATO headquarters in Brussels. They assist that organization in its international deployments.

There may be other deployments not listed here. Dozens of Canadian soldiers are on exchange programs with the US and other militaries and some of them may be part of deployments abroad.Additionally, Canadian Special forces can be deployed without public announcement, which has taken place on numerous occasions.

The scope of the military's international footprint is hard to square with the idea of a force defending Canada. That's why military types promote the importance of "forward defence". The government's 2017 "Strong, Secure, Engaged: Canada's Defence Policy" claims Canada has to "actively address threats abroad for stability at home" and that "defending Canada and Canadian interests " requires active engagement abroad."

That logic, of course, can be used to justify participating in endless US-led military endeavors. That is the real reason the sun never sets on the Canadian military.