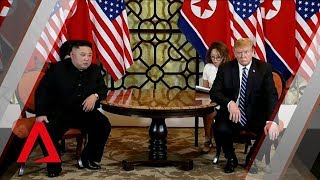 According to the New York Times [1] , Kim's demand all sanctions against the North be lifted was the point Trump wouldn't agree to. Basically it was, "We thought it wasn't a 'good thing' to be signing anything". [2]

Ah, "we"? Please. This was Trump and the US thumbing its nose at Kim and North Korea. When a reporter asked Kim after the summit whether he was ready to denuclearize he said, "If I'm not ready to do that, I wouldn't be here right now".

So there you have it. Kim was there to negotiate while Trump was doing what? Posturing? The self described deal maker couldn't muster anything to resemble an offer to Kim.

In essence Trump wasn't there to negotiate. It was first you give up your nuclear program and then we'll consider ending the sanctions. That's an ultimatum. Sanctions after all are an act of war.

Kim knows the only reason the US hasn't attacked his country militarily is because the North has nuclear weapons. And Kim should be ready to cede the very thing that prevents him and his countries demise? C'mon. That's simply a non-starter.

Where Trump and US and Kim and North Korea go after this is where? Kim could end the moratorium he unilaterally put on as a good faith gesture after his first summit with Trump and resume the weapons testing. Then Trumps coterie of war mongers would huff and puff condemning Kim from doing what? Doing what he needs to do to prevent the US from attacking him militarily?

As I said in my last article, "Trump and Kim in Hanoi, to discuss what?", "the ball is clearly in the US court."

In this summit with Kim not only did Trump not negotiate he wasn't even seriously intending to offer any concessions to North Korea short of them leaving themselves vulnerable to a US militarily attack. Kim made sure that wasn't going to happen.

That fact is the US can't conduct diplomacy anywhere internationally without the threat of acting militarily. And when it does act militarily it's an unmitigated disaster.

Simply put this summit's collapse is squarely on Trump and the US failure to negotiate. Not because of anything Kim asked for.

Retired. The author of "DECEIT AND EXCESS IN AMERICA, HOW THE MONEYED INTERESTS HAVE STOLEN AMERICA AND HOW WE CAN GET IT BACK", Authorhouse, 2009
Related Topic(s): Trump And Kim Round Two Summit, Add Tags
Add to My Group(s)
Go To Commenting
The views expressed herein are the sole responsibility of the author and do not necessarily reflect those of this website or its editors.