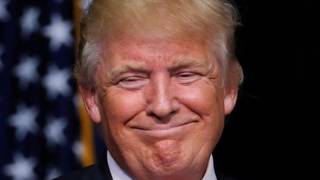 A cheap, greedy crook damaging the lives of ordinary people: that's what Trump always was, that's what he is today -- albeit on a monstrously larger scale. Of course, his MAGA mooks will just pull their red caps (made in China) down a little further over their eyes when confronted with this news. Then again, most of them will never hear it, because it won't be on FOX or its equally sinister propaganda partner, the vast web of Sinclair-owned local TV stations.

Meanwhile, the happy, hypocritical few at the top of our brutal economic food chain will just keep counting the money they got from Trump and Paul Ryan's trillion-dollar Yacht Club tax cut (money that they are hoarding, by the way, instead of using it to "stimulate the economy" -- the eternal scam line behind every tax cut). They don't care if a crook's in charge, as long he doles out the rake-off in the right direction. And they certainly don't give the slightest damn about rubes who've been overpaying rent for decades because a spray-tanned Capone and his morally rotten family wanted to shove a few extra dollars into their pockets.

One would hope this kind of thing will be picked up the #Resistance and given the kind of scrutiny currently paid to the slightest crumb of a possible Russian connection. (Because, as is well known, it was Putin's $4,000 worth of Facebook ads that mesmerized a handful of former Obama voters [and, in the '08 primary, Hillary Clinton voters] -- in a few broken-down, ignored counties in three swing states to switch their allegiance to Agent Trumpovsky and cunningly provide the margin of victory.) And if you think that even a marginally more focused, energetic -- and meaningful -- campaign, offering these and other voters even the slightest modicum of genuine change (instead of the very inspiring slogan: "We're Already Great, So Just Shut Up Already") would have outweighed Putin's super-powered Facebook ads, then you are obviously a Kremlin stooge.

But history shows that such hijinxs as revealed in the new Times article are generally ignored by our liberal legislative heroes. Because if one starts delving into tax-dodging schemes and other business practices designed to screw over ordinary citizens while milking them dry, why, who knows what one might find among one's party brethren and sistren? Best to keep the focus on the impenetrable murk of foreign espionage and, when possible, any saucy sexual angles you can find. I mean, come on: pay-offs to strippers? Get in!

(We saw this dynamic at play in the Kavanaugh hearings, where our Democratic champions simply skated over the judge's egregiously dubious finances and put the focus solely on the sexual-assault charges. Which were heinous, and obviously should have been examined. But in the end, the Republicans were happy to have it all come down to a "he said/she said" situation from decades before, and make that the sole basis for voting yea or nay on the vicious little partisan hack. Because there was never going to be a smoking gun in such a case -- unlike, say, an actual, physical paper trail of dirty, dubious financial dealings by the sniveling bagman for far-right interests.)

Of course, sometimes even the sexy sexual sex stuff must be shied away from if it involves, let us say, the same kind of Tip-n-Ronnie bipartisan comity that all good centrists long to see. Which is why -- as we have often, even tediously, noted in these pages -- the Clinton campaign could not use the nuclear bomb of sex scandals against Trump: his long-time, high-profile involvement with pedophile/pimp Jeffrey Epstein (who even recruited one of his victims from Trump's own plutocrat's playground down in Mar-a-Lago). But this button couldn't be pushed because good old Bill Clinton also had a long-time, high-profile involvement with the pedophile/pimp Jeffrey Epstein. And so it goes.

Anyway, maybe there will be some House committee not dominated by Democratic slumlords and tax dodgers in the next Congress, and we might see a little light on this facet of Trump's wide-ranging criminal and immoral activities. Stranger things have happened, I suppose. But I wouldn't bet next month's jacked-up rent on it.

Related Topic(s): Donald Trump; Family; Money; Screwing The Public, Add Tags
Add to My Group(s)
Go To Commenting
The views expressed herein are the sole responsibility of the author and do not necessarily reflect those of this website or its editors.