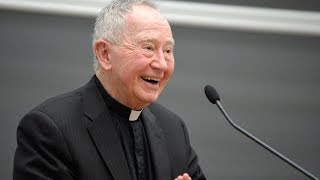 Duluth, Minnesota (OpEdNews) August 24, 2019: My favorite scholar is the American Jesuit Renaissance specialist and cultural historian Walter J. Ong (1912-2003; Ph.D. in English, Harvard University, 1955) for reasons I will elucidate as I go below. He liked to say that we need both closeness (proximity) and distance to understand something.

In the new book When Bishops Meet: An Essay Comparing Trent, Vatican I, and Vatican II (2019), the prolific American Jesuit Renaissance specialist and church historian John W. O'Malley (born in 1927; Ph.D. in history, Harvard University, 1966) brings what Ong refers to as closeness (proximity) to the matters that O'Malley now seeks to understand more fully from his previously published books on the Council of Trent (1545-1563), the First Vatican Council (1869-1870), and the Second Vatican Council (1962-1965), all published by Belknap Press of Harvard University Press:

O'Malley proceeds to establish a certain distance (in Ong's terminology) from these three historical councils by referring to them as past events, which of course they are. I will now briefly highlight each of O'Malley's four books in turn, using Ong's thought as a larger conceptual framework for discussing certain highlights of O'Malley's books.

Ong's indispensable study of print culture is his massively researched 1958 book Ramus, Method, and the Decay of Dialogue: From the Art of Discourse to the Art of Reason (Harvard University Press). It is centered on the history of the verbal arts of grammar, rhetoric, and logic (also known as dialectic) in Western culture with reference to the French Renaissance logician and educational reformer and Protestant martyr Peter Ramus (1515-1572). However, as wide-ranging as Ong is in his 1958 book, he does not discuss the Council of Trent.

But O'Malley shares an interest in common with Ong in the history of the verbal arts in Western cultural history, as O'Malley shows in his 2004 book Four Cultures of the West (Belknap Press of Harvard University Press). For a more specialized related study by O'Malley, see his 1979 book Praise and Blame in Renaissance Rome: Rhetoric, Doctrine, and Reform in the Sacred Orators of the Papal Court (Duke University Press).

Now, Ong had learned about Ramus and his influence at Harvard College (founded in 1636) and among college-educated seventeenth-century New England Protestants from Perry Miller's massively researched 1939 book The New England Mind: The Seventeenth Century (Belknap Press of Harvard University Press). Miller served as the director of Ong's doctoral dissertation at Harvard.

With the financial assistance of two Guggenheim fellowships, Ong tracked down more than 750 volumes by Ramus, his allies, and his critics (most in Latin) in more than 100 libraries in the British Isles and Continental Europe, which he lists and briefly annotates in his other 1958 book Ramus and Talon Inventory (Harvard University Press), which Ong dedicates to "Herbert Marshall McLuhan, who started all this [interest in Ramus]." As part of young Ong's Jesuit training, he did graduate studies in philosophy (in Latin) and in English at Saint Louis University in the late 1930s and early 1940s, where the young Canadian Herbert Marshall McLuhan (later known as Marshall McLuhan; 1911-1980; Ph.D. in English, Cambridge University, 1943) taught English from 1937 to 1944 while he continued to work on his doctoral dissertation on the history of the verbal arts of grammar, rhetoric, and logic (also known as dialectic) in Western culture. McLuhan's 1943 doctoral dissertation was posthumously published, unrevised but with an editorial apparatus, as the book The Classical Trivium: The Place of Thomas Nashe in the Learning of His Time, edited by W. Terrence Gordon (Corte Madera, CA: Gingko Press, 2005).

Now, for his doctoral dissertation in history at Harvard, O'Malley examined both manuscript publications and printed books by Cardinal Giles Antonini (1472-1532), known as Giles of Viterbo, a Renaissance theologian who wrote about church reform before the Council of Trent was convened. O'Malley explores the theme of church reform in the Roman Catholic tradition of thought in his deeply researched scholarly book Giles of Viterbo on Church and Reform: A Study in Renaissance Thought (Leiden, Netherlands: E.J. Brill, 1968).

In Ong's 1967 encyclopedia entry about (Renaissance) "Humanism," he includes Ramus and his followers as well as the early Jesuits in the larger movement of Renaissance humanism. Ong's essay is also reprinted in volume four of his Faith and Contexts (pages 69-92).

Related Topic(s): 1960s; Catholic; Catholicism; Culture; Faith; God; History; Literature; Logic; Philosophy; (more...) Philosophy; Technology; Technology; Theologians; Theology, Add Tags  (less...)
Add to My Group(s)
Go To Commenting
The views expressed herein are the sole responsibility of the author and do not necessarily reflect those of this website or its editors.