Chairman Elijah Cummings (D-MD) concluded the House Oversight Committee's questioning of President Donald Trump's former personal lawyer Michael Cohen by delivering a call to "keep democracy intact" and a return to normalcy in the political arena. He thanked Cohen, and revealing that he understood Cohen to be playing an important role in the nation's destiny. 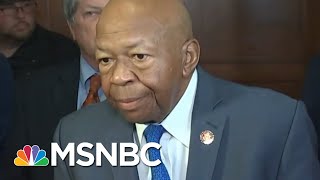 Elijah Cummings: '200 Years From Now, People Will Be Reading About This Moment' | MTP Daily | MSNBC Rep. Elijah Cummings (D-Md.) speaks to reporters after Michael Cohen's testimony and says Congress has an important job to do. ? Subscribe to MSNBC: ...
(Image by YouTube, Channel: MSNBC)   Details   DMCA

Cummings recaps, speaking to reporters after Michael Cohen's testimony encouraging them to honor their journalism and report what really happened in the hearings, not what the executive branch wants people to hear. He says Congress has an important job to do, "we must be a committee with integrity. I want to be effective and efficient in everything we do and in order to be effective and efficient one of the things we've got to do is you've got to reclaim civility."

Cummings expands the small shreds of hope some have for this country with brilliance, "200 Years from now, people will be reading about this moment."

"This is not the end of a process, but a beginning."

Cummings says his goal is to return the country to more normalcy. In response to questions, Cummings addresses voting rights, the census, prescription drugs.

Related Topic(s): Cummings-Elijah; House Oversight Committee; Integrity; Normalcy, Add Tags
Add to My Group(s)
Go To Commenting
The views expressed herein are the sole responsibility of the author and do not necessarily reflect those of this website or its editors.