Colorado high school student, Kendrick Castillo died saving his beloved classmates from a shooter on May 7. He had three days of school left before graduating. Kendrick was the sole fatality.

The shooting occured at STEM School Highlands Ranch in Colorado, where Kendrick was lead fabricator on the robotics team.

Kendrick, an only child, considered his classmates his family. He lunged at the shooter first, giving the other students precious moments to get to safety.

RT @ananavarro: While Trump & supporters at rally yesterday, reacted by laughing when someone shouted about shooting immigrants at the bord… at

Ana Navarro-Ca'rdenas tweeted, "While Trump & supporters at rally yesterday, reacted by laughing when someone shouted about shooting immigrants at the border, this Hispanic boy lay dead after losing his life trying to save others from a shooter. Did anyone say his name? He is Kendrick Castillo, American hero."

According to cnn, "'Kendrick was about a foot away from the shooter and he immediately sprang into action,' said Brendan Bialy, one of other students who jumped the gunman...After Bialy was able to move the gun away from the shooter, he checked on Kendrick and tried to get him to talk, but he wasn't moving. He recalls helping a teacher who came into the room and tried to render medical aid. Other students had tried to stop the bleeding by applying pressure to Kendrick's chest, Brendan's father told The New York Times.

Imagine being in your high school literature class. In a moment, your life is suddenly in danger... then you are trying to save your childhood buddy who is lying, bleeding on the ground. Trying to stop the blood, trying to get him to breathe. But he dies.

This is the educational legacy we have given our children.

"They did exactly what they were supposed to do, according to experts. Where people were once advised to flee or shelter in place, the new mantra for surviving an active shooter situation is "'run, hide, fight.'"

...the new mantra for surviving an active shooter situation is "run, hide, fight." 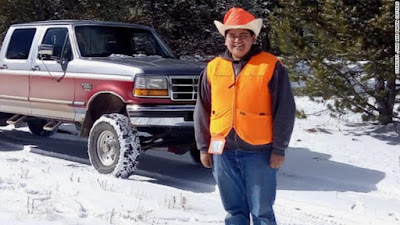 glen brown: Kendrick Castillo: .He was extraordinary.
(Image by teacherpoetmusicianglenbrown.blogspot.com)   Details   DMCA
According to cnn, Kendrick's parents were "not surprised to learn that their son ran toward danger. They raised him to be responsible and 'to be good...This wasn't your average kid,' Castillo said. 'He was extraordinary.'" Kendrick's father noted that Kendrick had a sibling relationship with many of this classmates, sharing holidays together and exchanging gifts.

Fellow student Aaron Busche said, " "The way he died was very much in his nature."

While still mourning the murder of their only child, Kendrick's parents said "they wish for Kendrick's classmates to heal, go to college, get married and start their own families surrounded by love." It's easy to see where Kendrick got his ethics from.

Kendrick's father said, "I wish he had gone and hid ... but that's not his character. His character is about protecting people, helping people. "a ccording to the Denver Post.

Related Topic(s): Gun Control; Gun Free Schools Act; Guns; School Shooting; School Shootings, Add Tags
Add to My Group(s)
Go To Commenting
The views expressed herein are the sole responsibility of the author and do not necessarily reflect those of this website or its editors.