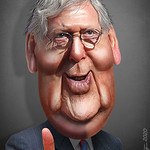 Former Senate Majority Leader Mitch McConnell (R) is refusing to give up his title, unless former Minority Leader Chuck Schumer (D) gets the democrats to agree not to overturn the 60-vote minimum needed to pass most legislation. For the purposes of this article, I'm going to assume that Schumer cannot eventually convince his party's senators to make such an agreement and that as the New York Times put it in an article this morning, and more succinctly in their morning On Politics email sent to subscribers:

With Schumer and McConnell at loggerheads over the rules, the Senate remains unable to move forward with its basic duties, including organizing itself into committees and setting rules for getting virtually anything done.

McConnell should swiftly be cut out from such tactical filibustering, and if senator Schumer won't do it, the Vice President, at the command of the President, should do it. The way to do that was already being considered by talk show host and political historian and author Thom Hartmann as far back as last September, when it became clear that the Senate might come down to a 50-50 tie, which, with the results of two Democratic victories in Georgia, it did.

Hartmann's full argument can be viewed in the first 4 minutes of a video featured here on Sierra Voices Journal, and other places. As the SVJ summarized on November 26:

Thom Hartmann has a fascinating idea, and he finds support for it in the Constitution: Vice President Kamala Harris, he suggests, could take over the Senate and set its agenda, pre-empting McConnell's role, which he enjoys only because of tradition. The role of Majority Leader is not prescribed in the Constitution, nor in the Senate rules. This would be both ironic and deliciously just, given McConnell's own record of disregard for tradition.

The Hartmann argument was debated further on the Democratic Underground.com, which is a debating forum for liberals (supposedly anyway; it looks like they may be having trouble moderating against insurrectionist commenters, since they closed the site to new registrations until January 20th, but it is still closed and there is no indication when it will reopen to new accounts).

A post by someone called Arkansas Granny, who has over 28,000 posts on the site, says:

Even if the Democrats don't win control of the Senate, there is a way to strip Mitch McConnell of his power for good: priority recognition.

According to Article I, Section 3, Clause 4 of the Constitution, the Vice President is also the President of the Senate. The Majority Leader is not a position that exists anywhere in the Constitution. The reason that the Majority Leader has near-dictatorial powers to control floor votes is because of a tradition that dates back to 1937. The tradition is that the Vice President gives the floor leaders priority recognition. Most notably, this is not a rule in the Senate.

This would change everything. Without Mitch McConnell to hide behind, the moderate Republican Senators would be forced to vote down every cabinet member, bill, resolution - everything that Harris would want done. Without McConnell, anything even remotely popular with at least two senators would pass, including getting a cabinet assembled.

Related Topic(s): Capitol; Democracy; Election; President Joe Biden; President Trump; Senate; Senate Democrats, Add Tags
Add to My Group(s)
Go To Commenting
The views expressed herein are the sole responsibility of the author and do not necessarily reflect those of this website or its editors.