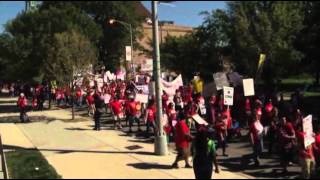 Thousands of teachers and students are walking out of schools, marching in the streets, and raising their hands and signs in protest against the war on education. Most recently, South Carolina has joined the wave of teachers' protests and strikes taking place across the nation. In the age of illiberal democracy and the growing fascism of the Trump administration, the unimaginable has once again become imaginable as teachers inspired and energized by a dynamic willingness to fight for their rights and the rights of their students are exercising bold expressions of political power.

The power of collective resistance is being mounted in full force against a neoliberal logic that unabashedly insists that the rule of the market is more important than the needs of teachers, students, young people, the poor and those deemed disposable by those with power in our society. Teachers are tired of being relentless victims of a casino capitalism in which they and their students are treated with little respect, dignity and value. They have had enough with corrupt politicians, hedge fund managers and civically illiterate pundits seduced by the power of the corporate and political demagogues who are waging a war on critical teaching, critical pedagogy and the creativity and autonomy of classroom teachers.

Since the 1980s, an extreme form of capitalism -- or what in the current moment I want to call neoliberal fascism -- has waged a war against public education and all vestiges of the common good and social contract. In addition, this is a war rooted in class and gender discrimination -- one that deskills teachers, exploits their labor and bears down particularly hard on women, who make up a dominant segment of the teaching force. In doing so, it not only undermines schooling as a public good, but also weaponizes and weakens the formative cultures, values and social relations that enable schools to create the conditions for students to become critical and engaged citizens.

Schools have been underfunded, increasingly privatized and turned into testing factories that deliver poor students of color to the violence of the school-to-prison pipeline. Moreover, they have also been restructured in order to weaken unions, subject teachers to horrendous working conditions and expose students to overcrowded classrooms. In some cases, the dire working environment and dilapidated conditions of schools and classrooms appear incomprehensible in the richest nation in the world. For instance, as South Carolina teachers go on strike, Hiram Lee reports:

"The average salary stands at $10,000 below the national average, while the minimum starting salary is only $30,113 a year.... Working conditions are extremely poor. [In one instance] raw sewage mixed with worms and insects flowed into the hallways of Ridgeland Elementary in Jasper County, where it was tracked into classrooms by students. In other schools, holes in the floors of some classrooms allowed students to see into the classrooms below them. Teachers used old rags and sandbags to prevent a flood of rainwater coming in through cracks in the walls. Libraries were filled with shockingly few books, and those on hand were so outdated that one teacher recalled finding a book that predicted, 'One day man will land on the moon.'"

What the South Carolina mobilization and the other teacher walkouts across the nation suggest is that these expressions of collective resistance are about both the survival of democracy in Trump's America and a challenge to the commanding institutions and organizing ideals and principles that make it possible.

The Reclamation of Education as a Public Good

Fortunately, teachers, students, progressive social movements and others are rising up, refusing to be written out of the script of a potentially radical democracy.

Yet, what has often been lost on those who have courageously charted this growing assault on democracy is perhaps its most debilitating legacy: the long-standing and mutually reinforcing attacks on both public education and young people. Such attacks are not new; rather, they have simply intensified under the Trump administration. As a war culture has started organizing all aspects of society, schools have transformed into zones of economic and political abandonment.

Increasingly modeled after prisons, schools have become subject to pedagogies of oppression and purged of the experiences, values and creativity necessary for students to expand and deepen their knowledge, values and imagination. Moreover, as state and corporate violence engulfs the entire society, schools have been subject to forms of extreme violence that in the past existed exclusively outside of their doors. Under such circumstances, youth are increasingly viewed as suspects and are targeted both by a gun culture that places profits above student lives and by a neoliberal machinery of cruelty, misery and violence dedicated to widespread educational failure.

Instead of imbibing students with a sense of ethical and social responsibility while preparing them for a life of social and economic mobility, public schools have been converted into high-tech security spheres whose defining principles are fear, uncertainty and anxiety. In this view, a corporate vision of the US has reduced the culture of schooling to the culture of business and an armed camp, and in doing so, imposed a real and symbolic threat of violence on schools, teachers and students. As such, thinking has become the enemy of freedom, and profits have become more important than human lives.

Public schools are at the center of the manufactured breakdown of the fabric of everyday life. They are under attack not because they are failing, but because they are public -- a reminder of the centrality of the role they play in making good on the claim that critically literate citizens are indispensable to a vibrant democracy. Moreover, they symbolize the centrality of education as a right and public good whose mission is to enable young people to exercise those modes of leadership and governance in which "they can become fully free to claim their moral and political agency."

Rejecting the idea that education is a commodity to be bought and sold, teachers and students across the country are reclaiming education as a public good and a human right, a protective space that should be free of violence, and open to critical teaching and learning. Not only is it a place to think, engage in critical dialogue, encourage human potential and contribute to the vibrancy of a democratic polity, it is also a place in which the social flourishes, in that students and teachers learn to think and act together.

Under the current era of neoliberal fascism, education is especially dangerous when it does the bridging work between schools and the wider society, between the self and others, and allows students to translate private troubles into broader systemic considerations. Schools are dangerous because they exemplify Richard J. Bernstein's idea in The Abuse of Evil that "democracy is 'a way of life,' an ethical ideal that demands active and constant attention. And if we fail to work at creating and re-creating democracy, there is no guarantee that it will survive."

Related Topic(s): Democracy; Education; Neoliberalism; Public Education; Public Schools; Students; Teachers Unions, Add Tags
Add to My Group(s)
Go To Commenting
The views expressed herein are the sole responsibility of the author and do not necessarily reflect those of this website or its editors.