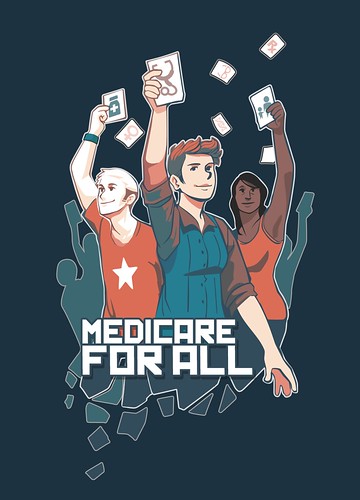 Medicare for All
(Image by juhansonin)   Details   DMCA

Often times the Governmental community becomes mired in a swamp of untold proportions. Trying to gain ground on moving forward they are instead sinking deeper and deeper into murkiness, thus is the present case of healthcare.

We forget the things that make the most sense: The simplicity of purpose, the logic of success. The purpose is low cost health coverage for all. My question is simple: "Which healthcare system works best, Obamacare, Ryancare, or Medicare?"

Yes Medicare, a single payer program run by the government. Everyone over the age of 65 is covered. Premiums and deductibles are low, and just about every doctor covers it. (If it were the only healthcare system in this country then ALL doctors would be using it and the problem of choice would be eliminated.) So why isn't this issue being talked about again?

We all heard the negatives: too expensive, it'll run out of funds just like Medicare is presently expected to do, death panels, waiting lists, etc. These are all scare tactics provided by lobbying priorities transferred into Congress.

I say surely intelligent minds should be able to find a way to make healthcare work for the whole population instead if trying to hack and sew together the remnants of Obamacare. As for the expected increase cost of former employer based signees, could bookkeeping transfer the employer's healthcare costs to half as a temporary tax payment with the same tax deductions for them. Again the numbers can be made to work, find the people that can do it.

And overall, presently we pay into Medicare through payroll. How can it work for the rest of the population? They too will pay into it through payroll deductions. If it can be done once it can be done again. Instead of decrying Medicare's inabilities, work to make it stronger. As for those that can't work, that is the true role of Medicaid and it will still be there. There's a way to do it all......don't make excuses. And yes, the government, for the sake of the people, should be able to regulated medical costs...(lowering).

Medicare for all would produce: Doctor's of choice, coverage for everyone since that would be the only type of insurance, (and those that might want an upgrade on Medicare such as full coverage can buy extra coverage from whatever insurance companies might still offer health coverage). But for the most part healthcare insurance companies would be forced to redirect their insurance coverage to other areas. And therein lies the problem: the Power of Influence!