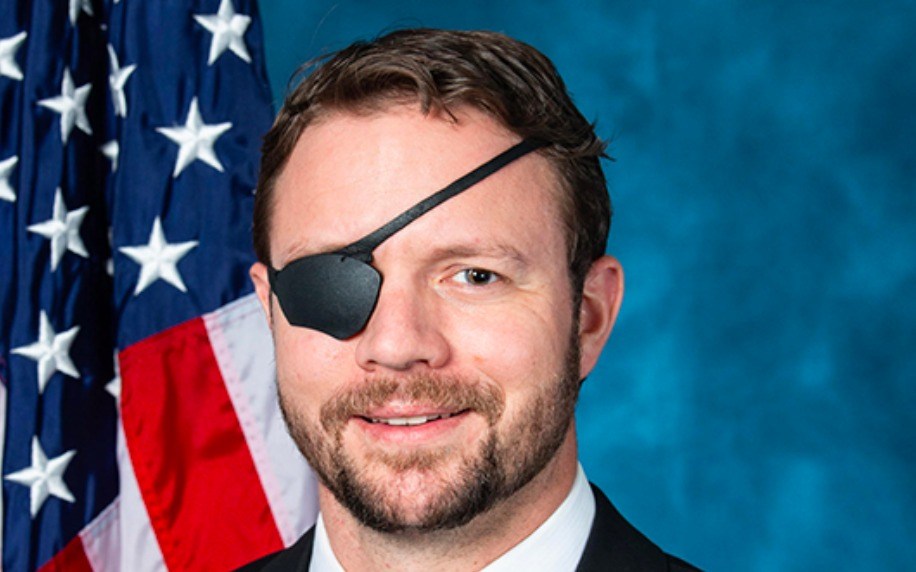 Republican Congressman Dan Crenshaw has a popular post going around on Twitter at the moment admonishing Senator Bernie Sanders for saying that the US government should not go to war if it can't afford to take care of its veterans.

"Watching Bernie pander to different groups to get their vote has always disgusted me, but now it's personal," Crenshaw tweeted. "I didn't go to war so that you would take care of me, Bernie. I went because I wanted to serve and our country needed it."

This "look at me, I'm a veteran" song and dance is par for course with Crenshaw, a former Navy SEAL who lost an eye to an improvised explosive device on his third deployment in America's evil and unjustifiable Afghanistan occupation. When Crenshaw says "I went because I wanted to serve and our country needed it," he is being delusional, and feeding into his delusion allows him to continue dominating public discourse with obnoxiously propagandistic takes like the notion that the US should continue its forever war without even so much as ensuring that it can take care of the people whose lives are chewed up and spat out by the imperial war machine. 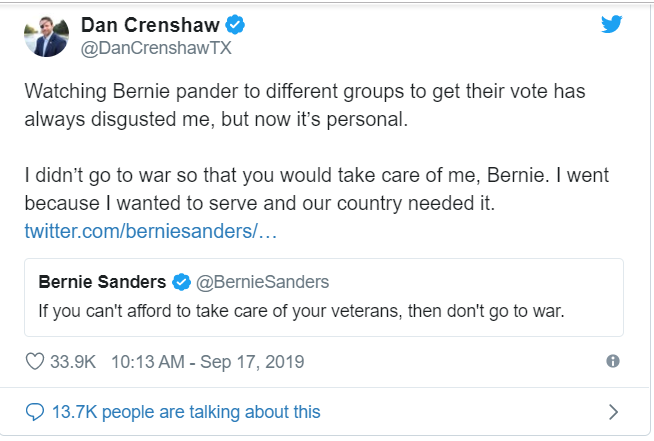 Dan Crenshaw did not serve his country. Dan Crenshaw is not a hero. Dan Crenshaw participated in a military occupation that after 18 years and counting has claimed tens of thousands of lives for no benefit to any ordinary American at all. All he served during his time in that country was the geostrategic imperialist agendas of unaccountable government agencies and the profit margins of war plutocrats, yet upon returning home he's been able to convert his stint as a glorified hired thug into social collateral which got him elected to the US House of Representatives and secured him a punditry platform from which he can spout war propaganda. All because people agree to play along with the completely nonsensical narrative that US war veterans are heroes.

You see this time and time again: a completely fact-free fairy tale about heroism and fighting for freedom is treated as unquestionable dogma by a populace who has agreed to treat US war veterans with reverence and respect, despite the fact that they chose to pour their time and energy into what is literally the most unhelpful and destructive endeavor that you could possibly devote yourself to. This unquestioning reverence is then consistently twisted into leverage for war propagandists to use in glorifying acts of mass military slaughter which benefitted no one and made the whole world worse.

The tightly controlled narrative about American veterans being heroes is always, always, always used to advance war propaganda and never to accomplish anything that is of service to mankind. It's an impulse which serves no one but the powerful. Of course veterans of US wars should be taken care of, and taken care of far better than they currently are, but not because they are heroes. Rather, they should be cared for because they spent time in a highly traumatic environment which sends home many highly traumatized people who will need a lot of help in order to reintegrate into society in a healthy way. What they went through was a horrible tragedy that nobody should ever have to go through, not a glorious thing that more people should aspire to enlist into.

It is more cognitively comfortable for veterans and their families to maintain the fairy tale that those who helped facilitate US imperialism are heroes who did something helpful and meaningful, but the fact that human minds are preconditioned to select for cognitive ease is a glitch in our operating systems which causes unhelpful cognitive biases; it's a flaw we need to overcome, not a virtue to be coddled. By continuing to coddle it you are facilitating war propaganda, and war propaganda is the indispensable foundation of war itself. By facilitating war propaganda you are participating in the war machine as surely as someone who takes up arms and fights in it, only less honest because, as Representative Crenshaw's face attests, at least someone who takes up arms is putting some real skin in that monstrous game.

It's like veterans are engaged with us in a bizarre live action role-playing game, where they pretend to be the heroes and the rest of us pretend to be the thankful civilians whose freedoms they fought for. But continuing to LARP with them in this way creates nonsense like we see in Crenshaw's tweet, and in the ridiculous smears against NFL players choosing to take a knee during the national anthem, and in the bleating of "Support our troops!" as a one-line shutdown of anyone who protested the Iraq invasion.

Don't participate in that stupid, war-facilitating, power-serving LARP. Don't say "Thank you for your service" to veterans. Don't pretend to agree with them when they claim to have fought for your freedom and democracy. Openly disagree with people who promulgate this narrative. Treat Veterans Day and Memorial Day as days of grieving and truth-telling, not celebration and glorification. The worshipful propaganda narratives that have been built up around veterans are an important cog in the war machine's consent factory, and they should be attacked as unapologetically as war propaganda narratives about what's going on in Syria or Iran.

"But Caitlin!" you may say. "What about World War Two veterans?"

Well, fine, but they're in their nineties now and you should probably be telling them whatever they want to hear anyway. And while we're on the subject, do you notice how far back you had to reach in US history to find a war in which veterans arguably fought for a just cause? The fact that the last possible example is on the cusp of living memory tells you all you need to know about your impulse to argue with me on this one.

I'm not saying to be mean to veterans, and I'm not saying veterans are bad people, in fact, one of the most heinous injustices about these corporate wars is that they turn many of our finest and bravest young people toward the very most toxic and pernicious ends possible. Many of them sincerely enlisted due to an impulse to help make the world a better place; it's the same impulse which led Julian Assange to set up a leaking outlet to help expose unaccountable power structures, the only difference is that Assange saw clearly through the fog of propaganda and they did not. But the reverence and fairy tales have got to go.

There are no war heroes. There are only war victims. It's time to grow up and stop pretending otherwise.

Related Topic(s): Veterans; Veterans Administration; Veterans For Peace; Veterans Mental Health, Add Tags
Add to My Group(s)
Go To Commenting
The views expressed herein are the sole responsibility of the author and do not necessarily reflect those of this website or its editors.