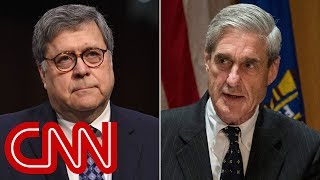 If you only tuned into US politics within the last couple of years this will come as a major surprise, but believe it or not, there was once a time when both major parties weren't constantly claiming that imminent revelations are about to completely destroy the other party any minute now. Used to be they'd just focus on beating each other in elections and making each other look bad with smears and sex scandals; now in the age of Trump they're both always insisting that some huge, earth-shattering revelation is right around the corner that will see the leaders of the other party dragged off in chains forever.

Enthusiastic Trump supporters have been talking a lot lately about the president's decision to give Attorney General Bill Barr the authority to declassify information regarding the shady origins of the discredited Russia-gate hoax, including potentially illicit means used to secure a surveillance warrant on Trump campaign staff. For days online chatter from Trump's base has been amping up for a huge, cataclysmic bombshell in the same language Russia-gaters used to use back before Robert Mueller pissed in their Wheaties.

"There is information coming that will curl your hair," Congressman Mark Meadows told Sean Hannity on Fox News. "I can tell you that the reason why it is so visceral -- the response from the Democrats is so visceral right now -- is because they know, they've seen documents. Adam Schiff has seen documents that he knows will actually put the finger pointing back at him and his Democrat colleagues, not the president of the United States."

"There is some information in these transcripts that I think has the potential to be a game changer, if it's ever made public," former Republican congressman Trey Gowdy told Fox News, referring to FBI transcripts of recorded interactions with surveilled individuals.

"Sources tell me there will be bombshells [of] information," tweeted Fox News contributor Sara A Carter of the coming decassifications.

.⁦@RepMarkMeadows⁩ Says 'Declassification is right around the corner' I certainly hope so because the American people deserve the truth - all of it. Sources tell me there will be bombshells if information. |https://t.co/0EpNJ2GZfG

Democrats and Democrat-aligned media are responding with similarly apocalyptic language, playing right along with the same WWE script.

"While Trump stonewalls the public from learning the truth about his obstruction of justice, Trump and Barr conspire to weaponize law enforcement and classified information against their political enemies," griped congressman, Russia-gater and flamboyant drama queen Adam Schiff, adding, "The coverup has entered a new and dangerous phase. This is un-American."

"President Trump's order allowing Attorney General William P. Barr to declassify any intelligence that led to the Russia investigation sets up a potential confrontation with the C.I.A.," the New York Times warns.

"William Barr's New Authority to Declassify Anything He Wants Is a Threat to National Security," blares a headline from Slate.

New from me: Trump's declassification order has set up a showdown between DOJ and the intelligence community that could trigger resignations and threaten the CIA's ability to conduct its core business managing secret intelligence and sources. https://t.co/iUFVCeWRe0

Related Topic(s): CIA; Draining The Swamp; Investigations; Politics; Stop Trump Movement; Surveillance; William Barr, Add Tags
Add to My Group(s)
Go To Commenting
The views expressed herein are the sole responsibility of the author and do not necessarily reflect those of this website or its editors.