If you are wondering why so little is heard these days of accusations that Russia hacked into the U.S. election in 2016, it could be because those charges could not withstand close scrutiny. It could also be because special counsel Robert Mueller appears to have never bothered to investigate what was once the central alleged crime in Russia-gate as no one associated with WikiLeaks has ever been questioned by his team.

Veteran Intelligence Professionals for Sanity -- including two "alumni" who were former National Security Agency Technical Directors -- have long since concluded that Julian Assange did not acquire what he called the "emails related to Hillary Clinton" via a "hack" by the Russians or anyone else. They found, rather, that he got them from someone with physical access to Democratic National Committee computers who copied the material onto an external storage device -- probably a thumb drive. In December 2016 VIPS explained this in some detail in an open Memorandum to President Barack Obama.

On January 18, 2017 President Obama admitted that the "conclusions" of U.S. intelligence regarding how the alleged Russian hacking got to WikiLeaks were "inconclusive." Even the vapid FBI/CIA/NSA "Intelligence Community Assessment of Russian Activities and Intentions in Recent U.S. Elections" of January 6, 2017, which tried to blame Russian President Vladimir Putin for election interference, contained no direct evidence of Russian involvement. That did not prevent the "handpicked" authors of that poor excuse for intelligence analysis from expressing "high confidence" that Russian intelligence "relayed material it acquired from the Democratic National Committee ... to WikiLeaks." Handpicked analysts, of course, say what they are handpicked to say.

Never mind. The FBI/CIA/NSA "assessment" became bible truth for partisans like Rep. Adam Schiff (D-CA), ranking member of the House Intelligence Committee, who was among the first off the blocks to blame Russia for interfering to help Trump. It simply could not have been that Hillary Clinton was quite capable of snatching defeat out of victory all by herself. No, it had to have been the Russians.

Five days into the Trump presidency, I had a chance to challenge Schiff personally on the gaping disconnect between the Russians and WikiLeaks. Schiff still "can't share the evidence" with me ... or with anyone else, because it does not exist. 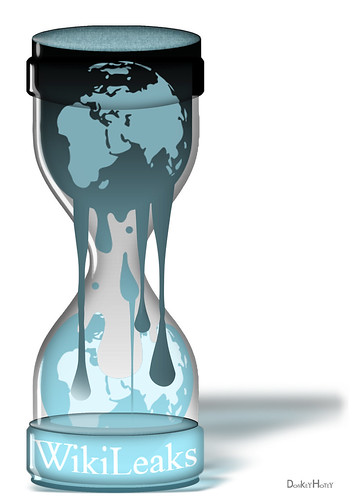 It was on June 12, 2016, just six weeks before the Democratic National Convention, that Assange announced the pending publication of "emails related to Hillary Clinton," throwing the Clinton campaign into panic mode, since the emails would document strong bias in favor of Clinton and successful attempts to sabotage the campaign of Bernie Sanders. When the emails were published on July 22, just three days before the convention began, the campaign decided to create what I call a Magnificent Diversion, drawing attention away from the substance of the emails by blaming Russia for their release.

Clinton's PR chief Jennifer Palmieri later admitted that she golf-carted around to various media outlets at the convention with instructions "to get the press to focus on something even we found difficult to process: the prospect that Russia had not only hacked and stolen emails from the DNC, but that it had done so to help Donald Trump and hurt Hillary Clinton." The diversion worked like a charm. Mainstream media kept shouting "The Russians did it," and gave little, if any, play to the DNC skullduggery revealed in the emails themselves. And like Brer' Fox, Bernie didn't say nothin'.

Meanwhile, highly sophisticated technical experts, were hard at work fabricating "forensic facts" to "prove" the Russians did it. Here's how it played out:

June 12, 2016: Assange announces that WikiLeaks is about to publish "emails related to Hillary Clinton."

June 14, 2016: DNC contractor CrowdStrike, (with a dubious professional record and multiple conflicts of interest) announces that malware has been found on the DNC server and claims there is evidence it was injected by Russians.

June 15, 2016: "Guccifer 2.0" affirms the DNC statement; claims responsibility for the "hack"; claims to be a WikiLeaks source; and posts a document that the forensics show was synthetically tainted with "Russian fingerprints."

Ray McGovern works with Tell the Word, the publishing arm of the ecumenical Church of the Saviour in inner-city Washington. He was an Army infantry/intelligence officer and then a CIA analyst for 27 years, and is now on the Steering Group of Veteran Intelligence Professionals for Sanity (VIPS). His (more...)
Related Topic(s): 2016; Assange; CIA; Election; Guccifer; Hack Attack; No Evidence; Russian Interference; Wikileaks, Add Tags
Add to My Group(s)
Go To Commenting
The views expressed herein are the sole responsibility of the author and do not necessarily reflect those of this website or its editors.